Of the remaining General Motors nameplates, Buick is the one that's most difficult to wrap your mind around. On the one hand, it's supposed to be a premium brand, but on the other, it's selling vehicles with sticker prices that tend to start in the $20,000 price range, seemingly encroaching on Chevrolet territory. To wit: The Buick Verano is a bit over $23,000 and the Buick Regal starts just under $28,000, while Chevy sells its Cruze, Malibu and Impala in that same range. Even the Buick LaCrosse, whose price shot up nearly $4,000 this year, starts at $31,045. Indeed, GM must be using a mandoline to price the different versions of its sedans clustered around the $25,000-$30,000 price range.

But it's over that threshold where things get really perplexing. Because whether we understand GM's strategy or not, a twenty-some-thousand dollar Buick makes sense. You look at all the boxes you have to tick on a mainstream brand product to get the amenities that Buick offers and you dump that and all the data about the premium competition in a spreadsheet, and you can probably justify a Buick as a wise purchase. If you're an actuary or an accountant, all the better.

A Regal GS with a $35,310 base price (or an as-tested cost of $38,155 like ours), however, has stepped onto an entirely different playing field, like a junior varsity kid getting bumped up to play on Friday night. This isn't the sort of car you research over the Internet and lease after a five-minute test drive. It's purportedly a driver's car, something to seek out and manhandle. We thus find it rather disingenuous to compare it with cars from Acura and Volvo – the Regal GS is really scrapping with vetted sports sedans like the Audi A4 and BMW 3 Series, and even its kissing-GM-cousin, the larger Cadillac CTS.

Lacking a similar performance dossier or brand cachet, the GS needs to deliver an exceptional driving experience, which we're happy to report it mostly does. What it doesn't do, however, is mess too much with the basic Regal package. That's neither here nor there, as the Regal is a middle-of-the-road car that claims just as few fans as it does critics. The addition of monstrous air intakes and chromed dual exhaust tips to the new front and rear fascias isn't likely to change that, though perhaps the optional 20-inch, 10-spoke wheels might. They're both pretty (thank you, chrome) and aggressive looking, showing off big, 14-inch front rotors and Brembo calipers up front.

Inside, the upgrades are similarly substantial and focused on performance. A big, flat-bottomed steering wheel feels great in your hands, while the sport seats are worthy of cuddling. We've written before about our problems with the poorly designed gearshift lever for the six-speed manual, and our opinion there hasn't changed. Neither has our dislike of Buick's infotainment system.

But all of this is really beside the point. The reason to buy a GS is what lurks underneath, starting with its 270-horsepower turbocharged four-cylinder engine. With just two liters of displacement, GM says the Regal GS can lay claim to having the highest specific output of any production engine it's ever sold, which is pretty cool. It's certainly something to throw out there when your BMW-driving friends ask why you bought a Buick. (Its 22-mile per gallon combined EPA rating you can just keep to yourself.)

The little four makes 295 lb-ft of torque at just 2,400 rpm, which is enough to make this car pretty quick, with instrumented testing by our friends at the buff books showing 0-60 times just a few beats over six seconds. Now, with all that torque, you would think that the GS would be a mess to launch, with torque steer all over the place. But that's not the case. In fact, this Regal is one of the least problematic front-wheel-drive cars we've driven when it comes to being able to put the power to the pavement. Handling in dynamic situations is similarly well composed, with body roll all but nonexistent if you have the car's suspension set in either "Sport" or "GS" mode. Unlike some vehicles that feature sport modes, the Regal's is actually noticeable in the way it firms up the suspension and tightens up the steering effort. That switching to GS mode turns the instrument lighting "white hot" is a small but effective touch.

GM deserves plenty of praise for its HiPer Strut suspension system, which effectively separates the steering and suspension components in the MacPherson strut assembly, really helping the GS' steering to feel more like that of a rear-drive car. The penalty to HiPer Strut is that it weighs about 18 pounds more than a conventional system, which no doubt adds to the weighty steering feel of the GS. While the conventional hydraulic steering isn't the most communicative about what's going on at the tire-road interface, it's far improved from the electric unit in the standard Regal, and it isn't ponderous, as the car turns in as quickly as anything wearing 20-inch rubber can. The Regal GS boasts cornering abilities that far outpace what you'd expect to use on public roads.

The GS is a relatively heavy car at 3,700-plus pounds, and indeed, it feels substantial in a good way. The upgraded touchpoints like the seat, wheel, and steering combine to make the car feel worlds different than the base Regal. Of course, there's also that good old fashioned "stick shift" protruding between the front buckets, and as much as it's a thing of wonder to see one in a Buick, it's not quite as satisfying as it could be. While the clutch on the GS feels nicely weighted and easy to modulate, the shifter has long throws, which lead to an imprecise feel. The brakes, though, are a phenomenal upgrade for the GS, and they give it real stopping power in line with the rest of the package. In total, the GS is a really well balanced car, and it gives the impression that GM put considerable effort into tuning so that its disparate systems work well together. Even the large 20-inch wheels, which on paper struck us as overkill, seem absolutely appropriate once you get a chance to wring out the GS a bit.

But as much as we liked the mechanical setup, there's room for improvement, and we're not just talking about an extra 50 horsepower and all-wheel drive. The exhaust on the GS is just too quiet, lacking much in the way of growl, resonance, or even mean-spirited wail. Along the same lines, the thing that most bothered us is that the GS never really blows you away with its performance. Given that most people who are in the market for a front-drive sport sedan are probably looking for a Q-ship anyway, maybe this isn't a problem, but the GS seems like it should be more fun to drive than it is. While we wouldn't want to upset the nice balance between power, braking and handling, the dial on the GS clearly does not go to 11.

That muted feeling is even there in the aesthetics of the car. Although we like what Buick has done with the steering wheel and the seats and the wheels, we'd like to see a little more panache. For instance, while we're not a huge fan of gratuitous contrasting stitching or seatback embroidery, the GS could use just a bit of color to brighten up the any-color-as-long-as-it's-black interior. Then there's all the monochrome Buick badges, both inside and out, which are the same as those on the standard Regal. Buick has a pretty cool looking red, white and blue tri-shield logo – how about dusting that off to spice up the GS?

Because when you get down to the inevitable number crunching, even if the GS is the most entertaining new Buick we've ever driven – which it is – it's not exactly pushing any boundaries once you look past the traditionally myopic Buick brand. The Regal GS is still a Buick built for rational people. And that's exactly why it's hard to imagine choosing it ahead of a 3 Series, an A4 or a CTS.

Sabatini has it right. As much as I like the way the GS goes about its business offering striking good looks and an appealing handling balance, I just can't wrap my head around this car's value equation. Part of that may be because I've driven the model that GM more-or-less promised U.S. enthusiasts – the Opel Insignia OPC, and it's an altogether more serious piece of kit. Rifle-bolt gearshift, seats by Channellock, snarlier 325-horsepower 2.8-liter V6 and a torque-vectoring all-wheel-drive system add up to a massive personality shift for the better. The OPC feels something like a cut-rate Audi S4, while the Regal GS feels like... a Regal with a really good sports pack and a row-it-yourself gearbox.


If it were otherworldly quick or stupendously luxurious inside, maybe they'd be on to something, but it's neither.

For my money, GM has miscast the Regal (and indeed, much of the Buick brand) as a premium product. Inside-and-out, that means the standard car stacks up against more mundane sheetmetal like the Ford Fusion and Kia Optima, yet it's much more expensive. A base Regal starts at nearly $28,000, a frankly bewildering sum for a brand that has yet to earn back any premium cachet. This GS offers more of the same questionable math, starting at nearly $36,000. If it were otherworldly quick or stupendously luxurious inside, maybe they'd be on to something, but it's neither.

For example, the Hyundai Sonata Turbo offers similar power, a larger interior with similar quality and appointments, and superior fuel economy for right around $25k. No, you can't get a manual, and yes, the Buick certainly handles better (few would call the Sonata 2.0T a sport sedan), but those two things fail to justify the massive pricing discrepancy on my mental ledger.

Ignore the price tag, and the Regal GS is a great car – one of the most impressive sport sedans ever offered by an American brand ... but who ignores the price tag? 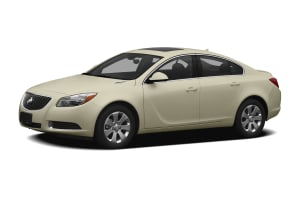