Danny King
Heather Peters, who last week was awarded almost $10,000 in a California court in damages over claims that Honda falsely advertised the fuel economy of its Civic Hybrid, is delivering a petition to the 50 state attorneys general urging that class-action plaintiffs against the automaker bargain for a better settlement. As of today, almost 1,150 people have signed the petition.

Peters, who was awarded $9,867.19 in small claims court, said in a press release that Honda's offer of as much as $200 in cash and as much as $1,000 off a new Honda was "ridiculous," and that the plaintiffs could do better by opting out of the current class-action complaint. Peters said that the deadline to object to Honda's current settlement offer is February 11.

Last week, the small claims court commissioner in Torrance, CA, ruled that Honda misled Peters by estimating that its Civic Hybrid could get as much as 50 miles per gallon, according to the Los Angeles Times. Honda said it would appeal the decision.

In her case, Peters alleged that her 2006 Civic Hybrid never reached more than 42 miles per gallon and that the car's fuel economy dropped to less than 30 miles per gallon after Honda performed a software update on the car. Honda was the defendant in a class-action lawsuit stemming from the automaker's estimates of fuel economy for the 2003-07 model years, which were 49 miles per gallon city and 51 highway. Honda settled that lawsuit out of court in 2009, after which 26 state attorneys general called the settlement unfair because attorneys made more from the case than the defendants did.
Show full PR text
HEATHER PETERS DELIVERS 1,000+ SIGNATURES TO 50 STATE ATTORNEYS GENERAL URGING OBJECTIONS TO HONDA'S CLASS ACTION SETTLEMENT

Los Angeles, CA - Fresh off her historic $9,867.19 small claims victory against Honda for false advertising of the Honda Civic Hybrid, Heather Peters is not letting up. Determined to push for a better class action settlement for 500,000 other Civic Hybrid owners, she will deliver her petition today to all 50 State Attorneys General urging them to object to the current proposed settlement of $0-$200 cash, plus a coupon towards another Honda. The deadline to object is February 11th.

With the help of some very loyal supporters, she collected over 1,000 signatures on the petition from all 50 states and DC in just 12 days! Over 250 comments were posted on the petition including:

"This car is dangerous! The amount of power is unpredictable"

"Getting 30 mpg at best plus with the software update, this car is not safe to drive"

"Unfortunately this is just the tip of the iceberg and my judgment against Honda for almost $10,000 proves that it is ridiculous for Honda to try to settle these claims for pennies on the dollar. The Attorneys General need to step in to object."

26 State Attorneys General united to defeat Honda's last attempt to settle these cases in 2009. This proposed settlement is not much better and it would now include a release of Honda's liability for a 2010 software update that reprogrammed the car to prolong the life of the $3,000 warrantied hybrid battery by using it less and using the customer's gas more!

Anyone who owned or leased a new or used 2003-2009 Civic Hybrid is part of the class action unless they opt-out by February 11th. Heather says hundreds of class members have contacted her through her website www.dontsettlewithhonda.org to say they are opting out to follow in her footsteps in small claims court. She is publishing her evidence on CD and has reactivated her law license to help her fellow Honda owners. A contact list is available on request for more than 80 of these opt-outs across the nation who are willing to be interviewed. 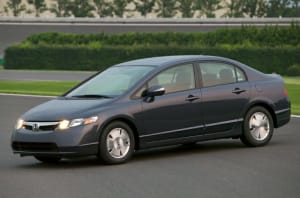