As far as the Mini lineup goes, the John Cooper Works models sit at the very top of the performance spectrum. But that's not enough for Mini's (relatively) new chief Kay Segler. The German auto exec came to the post from the M division of parent company BMW, and that's what Segler wants for the Mini brand as well.

So what does a further differentiated JCW line mean for the Mini? That's hard to say at this point, beyond marketing, but we could be looking at even more powerful versions than the 208-horsepower, 1.6-liter turbo four currently employed. With the arrival of the JCW Countryman, Mini will have created Works versions of every bodystyle in its considerable portfolio – and it will have a more powerful 223hp mill on its hands, which could find its way into the rumored upcoming Mini GP edition as well.

More exciting JCW models aren't all that Segler has planned for Mini, however. According to Car and Driver, as U.S. demand is growing for for Mini's diesel-powered models already offered in Europe and other markets. While we wouldn't expect an oil-burning Mini to find its way across the Atlantic in this generation of models, once the next series comes along in the next couple of years, a diesel-powered Mini could wind up in American showrooms. 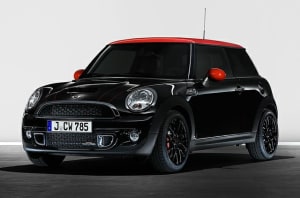