Jeff Sabatini
You won't have to wait until February 5 to see the new Suzuki Super Bowl commercial, as it's hit the automaker's YouTube channel in advance. Featuring an Eskimo who trades in his sled on an all-wheel-drive Kizashi, it's fun and decidedly more upbeat than last year's marauding snowmen.

Still, we kind of prefer the snowmen, which were more unconventional than the Eskimo ad's predictable plot. This year's ad also embraces two of the major Super Bowl ad tropes of recent years: adorable dogs and bickering couples. Neither of which is likely to win Suzuki any points for creativity.

Regardless, we have to admit that sliding a Kizashi at opposite lock across the frozen tundra looks like fun, and we think the underappreciated Suzuki is worthy of some extra attention. Click past the jump to watch the commercial in its entirety.

"We are delighted to celebrate our successful 2011 sales year with an 11 percent increase, by once again showcasing the personality of the Suzuki brand and our award-winning Kizashi sport sedan on advertising's biggest stage," said Jeff Holland, director of social media, American Suzuki. "The Kizashi's all-wheel-drive performance and luxurious interior make it the perfect choice for those looking to upgrade their ride."

Developed by El Segundo, Calif.-based advertising agency Siltanen & Partners Advertising, Suzuki's "Sled" television spot illustrates the exhilaration one can receive from upgrading their ordinary daily driver with a more entertaining mode of transportation. In this case, trading in a dog-powered snow sled for a sporty new 2012 Kizashi.

Set in an isolated mountain location, "Sled" opens with an early morning scene where an Eskimo and his dog sled team ride off into the horizon. As the landscape changes from morning to evening, the quiet still of the frozen tundra gives way to vibrations and a hint of something new in the distance. A Kizashi – accompanied by a strong hip hop beat – comes driving into view with one of the Huskies' heads sticking out of the front passenger window enjoying its owner's new mode of transport. The spot then cuts to the interior of the vehicle, revealing the other sled dogs buckled into the back seat and the Eskimo behind the wheel of the Kizashi – all of whom are digging the lavish accommodations and warm interior of the car, while bumping their heads and tapping their paws to the song's beat.

The Eskimo pulls up to his igloo and his wife comes out to greet him. With a puzzled look on her face, and in her native Inuit tongue, she asks, "Where's the sled?" The man replies, "I traded it in," (the conversation is subtitled in English).

"The secret to any great commercial is creating a spot that captures viewers' attention, but is also relevant and distinctive to the product and brand," said Rob Siltanen, CEO and chief creative officer of Siltanen & Partners Advertising. "Even more during the Super Bowl, people fully expect to be entertained with a story, and I think this year's Kizashi spot shares a classic husband and wife tale everyone can relate to."

Suzuki's 2012 Super Bowl spot will air both in 60-second and 30-second formats in the company's top retail locations across the U.S. "Sled" will continue to run following the Super Bowl in conjunction with a new Suzuki advertising campaign scheduled to debut in March.

In addition, starting on Super Bowl Sunday, Suzuki will give away BARKCODE® tags to the first 1,000 consumers to register on www.KizashiKicks.com/sled. Each personalized pet identification tag has a scannable 2D code, making it easy for pet owners to be reunited with their four-legged friends when they are lost or even misplaced during a natural disaster. With each tag that is ordered through the Kizashi Kicks website, BARKCODE®, on behalf of Suzuki, will donate three dollars to the American Red Cross1 for disaster relief and preparation to help people and pets. For additional information on BARKCODE®, please visit www.barkcode.com/.

The 2012 Suzuki Kizashi anchors Suzuki's versatile vehicle lineup, helping move the brand upscale without abandoning the company's traditional emphasis on content and value. The sleek and stylish sport sedan was recognized as No. 1 in owner satisfaction vehicle among midsize cars in J.D. Power & Associates' annual APEAL study, as well as the top sedan in AutoPacific's Vehicle Satisfaction Awards among midsize cars for the second consecutive year, and received a Best Buy designation from Consumers Digest, among other prestigious automotive accolades.

The Brea, Calif.-based Automotive Operations of American Suzuki Motor Corporation was founded in 1963 by parent company Suzuki Motor Corporation (SMC) and currently markets its vehicles in the United States through a network of approximately 250 automotive dealerships and numerous other motorcycle, ATV and marine distributors. With global headquarters in Hamamatsu, Japan, SMC is a diversified worldwide automobile, motorcycle and outboard motor manufacturer. In 2010, SMC sold more than 2.5 million new cars and trucks and more than three million motorcycles and ATVs. In 2011, Suzuki was ranked #2 in total vehicle sales behind Toyota and ahead of Honda and Nissan. Founded in 1909 and incorporated in 1920, SMC has operations in 193 countries and regions. For more information, visit www.media.suzukiauto.com. Suzuki can also be found on Twitter (@SuzukiAuto), Facebook (www.Facebook.com/SuzukiAuto) and YouTube (www.YouTube.com/SuzukiAutomotive). 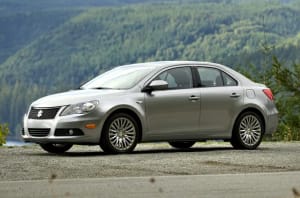