First it was Vette on Vette violence, now it's Z on Z carnage

Chris Shunk
Back on Thanksgiving Day of 2011, we saw what happens when a C5 Chevrolet Corvette goes head-to-head on public roads against a C6 Vette – the older Vette spears into the passenger-side door of the newer Vette. The video was our most popular post of 2011, so we know that well over a million viewers saw the ill-advised drag race. We think that video illustrated that racing on public roads was a bad idea, but sometimes, accidents happen even without a race.

Hit the jump to see what happens when a pair of tuned-out Nissan 350Z models do their best impression of the Thanksgiving Day Melee. The YouTube page claims that the two cars were actually traveling at the speed limit (read: not racing) as part of a caravan of Z models, when the black, supercharged Z coupe tapped its throttle and lost control, veering into the passing lane and right into the path of a Z roadster.

Still, the collision looks like déjà vu all over again, except the quick video is better this time and we actually hear the impact and see the parts flying all over the freeway. The accident reportedly didn't result in any serious injuries. 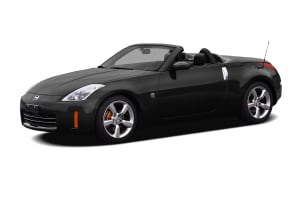