Audi may have accidentally let slip the exterior design of its upcoming 2013 A3.The German automaker set about showing off the hatchback's cabin with a static display at Las Vegas' CES ahead of the vehicle's expected unveiling at the 2012 Geneva Motor Show. The display gives the world a sense of what to expect from the luxury compact's front seats, center console and dash, which features a stand-alone LCD display that rises out from above the instrument panel's center air vents. Like other Audi displays, the screen features various vehicle menus, including two that show off the full exterior of the three-door model.

Judging from these two quick glimpses at the hatchback, the three-door will feature a new, more aggressive face. From the looks of things, buyers can expect to continue to find a large, signature Audi single-frame grille flanked by more purposeful headlights and sporty air intakes set low int he front fascia. Head over to Audiboost.com for a closer look at the vehicle inside and out. Don't get too attached to what you see, however. Past reports have suggested the vehicle will only debut as a sedan here in the States.

Featured GalleryAudi Connect in 2013 A3 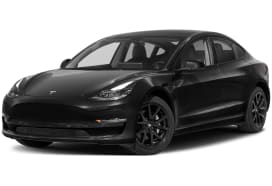