Dan Roth
Massachusetts Lieutenant Governor Tim Murray (Dem) didn't brake or try to steer away from the rock ledge his Ford Crown Victoria was headed for at speeds of nearly 100 miles per hour. That's according to reports stemming from the aftermath of an early morning accident on November 2, 2011 in which Murray's state-owned car left the roadway on Interstate 190 in Sterling, MA, and struck a rock ledge at 92 mph before rolling over. The Massachusetts State Police have released the black box data from the incident, which revealed not only the high rate of speed, but also contradicts prior statements from Lt. Governor Murray that he was wearing a seatbelt and driving around the speed limit.

This particular stretch of Interstate 190, which your author drives five days a week, isn't particularly treacherous, although the region did experience a freak snowstorm just two days prior on Halloween. The storm caused significant damage to trees and power outages were widespread, and Lt. Governor Murray had set out early that morning to assess the damage in the region that serves as his homebase. Massachusetts State Police have concluded after analyzing the black box data that the Lieutenant Governor fell asleep at the wheel, which accounts for the rapid acceleration from a sustained 75 mph to essentially flat-out, as well as the lack of avoidance maneuvers or braking attempts.

At the scene, Lt. Governor Murray asked for a Breathalyzer, which showed there was no alcohol in his system, and in statements since then, he's pledged to reimburse the state for the vehicle. In light of this latest evidence, State Police cited Lt. Governor Murray with a $555 fine, but he managed to avoid further charges including reckless driving. From where we sit, that's a stroke of good fortune, but no more lucky than Murray avoiding serious injuries in the first place. 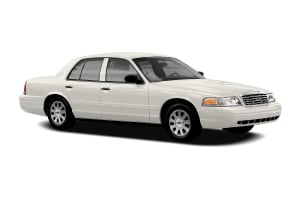