The Nissan Juke R concept may have sought to define the high-performance compact crossover, but what happens when you don't have a million-dollar budget, Nissan UK's engineering talent and a spare GT-R lying around? You build your own. And that's what Fox Marketing is doing. Well, almost...

The crew behind some of our favorite builds has apparently taken inspiration from the Juke R and decided to make something slightly less powerful, much more affordable and on the high side of attainable. It's called the Juke S and it's set to debut later this year.

According to Fox, they'll be retaining the turbocharged 1.6-liter four-cylinder and torque vectoring all-wheel-drive system used in the standard Juke, but they plan to push the wee engine passed the 400 horsepower mark with a host of breathing mods and a massive turbo.

Other kit will include 14-inch, six piston calipers, 20x9-inch wheels, a reworked suspension, Yonaka Ronin racing seats and an exterior fitted with a custom body kit and Foxy Orange paint from BASF. If all goes according to plan, we'll be seeing it before the summer, and hopefully it will inspire Nissan to develop its own hotted-up Juke for production. 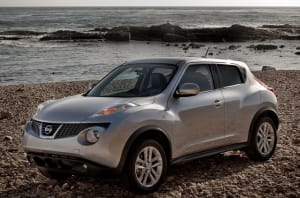