The sport utility vehicle became an endangered species not long after fuel prices began to skyrocket. But while vehicle buyers changed their shopping habits, they didn't actually stray that far from the SUV formula. Many of today's hottest-selling vehicles are crossovers; essentially the same tall wagons as the SUV, but with a lighter unibody chassis.

Among other things, the CUV promised to deliver superior efficiency, and while some improvement has been evident, in many cases, the genre's fuel savings have failed to impress. A good case in point is the Ford Edge. When Ford's two-row CUV entered the market in 2007, it managed only 24 miles per gallon on the highway, and many buyers struggled to hit 20 mpg in mixed driving cycles. There were plenty of reasons for its unimpressive efficiency. Most crossovers remain substantially heavier than a comparable four-door sedan, and with plenty of frontal area, they don't exactly slice through the wind. But perhaps the biggest issue has been unevolved powertrains.

Ford thinks it has the answer to that problem in the form of its new EcoBoost 2.0-liter four-cylinder engine. Ford is using the compact, turbocharged mill in a variety of crossovers, including the 2012 Ford Edge, and we sampled a well-equipped Edge Limited to see how effective the Blue Oval's engine downsizing strategy is going.

Our Dark Blue Pearl Metallic tester in Limited trim carried a base price tag of $34,915 that rises to $35,910 by ticking the EcoBoost option box. Ford doesn't mess around when it comes to the Limited trim: Standard accoutrements include leather-trimmed and heated seats up front, a 10-way power driver's seat, dual-zone climate control, SYNC infotainment, a 390-watt Sony sound system, back-up sensors and a rear view camera.

Our Edge was also packed with some of Ford's top options, including the 2.0-liter EcoBoost upgrade, Ford's excellent navigation system ($795), and BLIS blind-spot detection ($485). This Edge Limited also included the Drivers Entry Package ($895), which adds remote start, push-button start and a power rear lift gate. Also making the scene was Ford's much-maligned MyFord Touch system – in this guise, it includes a pair of 4.2-inch LED screens in the gauge cluster and five-way steering wheel controls. With all options present and accounted for, our tester came in at $38,910.

The draw for this Edge Limited is the 2.0-liter EcoBoost four-cylinder engine, which is a $995 option compared to the capable and relatively efficient 3.5-liter V6. The extra coin will deliver 240 horsepower and 270 pound-feet of torque mated to a smooth-shifting six-speed automatic transmission. That isn't as much punch as the 285 horsepower 3.5-liter V6, but the real story comes with a twist – the turbo 2.0 boasts 17 more lb-ft than its bigger, naturally aspirated brother, and it arrives in full force at 3,000 rpm (the V6's torque doesn't max out until 4,000 revs).

That extra pull is evident from behind the leather-wrapped steering wheel. The EcoBoost four provides good straight-line acceleration, with a 0-60 time that we estimate to be just over seven seconds. The EcoBoost also weighs a bit less, tipping the scales at 3,998 pounds – 58 fewer pounds than a front-drive V6 model. With torque that comes on early in the revband, the EcoBoost feels even quicker than any instrumented testing might suggest – at least until hitting the freeway. When we tested the V6-equipped Edge about a year ago, passing acceleration felt a bit stronger at highway speeds. The boosted four-cylinder also doesn't sound quite as pleasant as the V6, but noise levels aren't obtrusive.

The 58-pound weight advantage isn't particularly significant, so there isn't much difference in the handling department between the V6- and EcoBoost-powerd Edges. In fact, the Edge is still a bit of a porker, as this midsize CUV is a few sandwiches shy of two tons. Luckily, the EcoBoost powertrain has plenty of punch, and at 76 inches across, the Edge is all kinds of wide, which helps minimize body roll even when the roads get curvy. The Edge also employs a stiff yet forgiving chassis aided by MacPherson struts up front and an independent rear suspension with trailing blade, integrated knuckle and lateral links. We were a bit surprised to learn that Ford has taken a pass on electric power assisted steering here in favor of a traditional hydraulic setup, as moving to EPAS likely would've helped conserve a bit more fuel. The upside is that the variable-assist unit is accurate and quite natural in feel.

The real test of the EcoBoost four-cylinder isn't how it goes and stops, however. We remain more interested in the Edge's fuel economy, because the Environmental Protection Agency estimates suggest this diminutive powertrain should hit 21 miles per gallon in city driving and 30 mpg on the highway. Those are the kind of numbers that we might have hoped for from a midsize sedan only a few years ago, but the Edge manages to find membership in the 30 mpg club in spite of the fact that it's the widest vehicle in its segment, weighing in at 238 pounds more than the longer Toyota Venza. While the lion's share of the improvement is due to the smaller engine, Ford's engineers have also executed a number of meaningful tweaks to the rest of the Edge package, including fitting low rolling-resistance tires along with revised rocker panels and active grille shutters for improved aero. Unlike its three-row sibling, the Ford Explorer, towing capacity remains the same regardless of which engine you choose: 3,500 pounds.

Impressively, we were even more pleased with our real-world mileage. We averaged a surprising 25.1 miles per gallon during our week of driving. For comparison's sake, we averaged 21.9 mpg in the 3.5-liter-equipped Edge, itself a reasonable number. Assuming our 3.2 mpg difference is representative of real-world fuel economy, is the EcoBoost's efficiency increase worth $995? If we assume 12,000 miles per year and 87 octane gas sits at $3.50/gallon, the EcoBoost owner can expect to pay $1,673 for fuel each year. The equivalent 3.5-liter V6 owner faces a $1,917 tab – $245 more than the EcoBoost model. That means the $995 price tag of the EcoBoost model should pay for itself in about four years or about 50,000 miles. That's far from an immediate return on investment, but it's not bad and the equation could get more favorable if fuel prices spike.

The boosted four cylinder makes for fun and efficient motoring, and the experience is only enhanced by a rich and inviting cabin. Having been comprehensively upgraded for 2011, the Edge interior now boasts soft-touch materials everywhere occupants care to touch, including a terrific steering wheel and leather-clad shifter, plus a very cushy dash. The seats are also a plush affair, with enough cushion to find a place of honor in most living rooms, and enough bolstering to hug torsos without making drivers feel like weekend racers. The Edge also scores high praise for its roominess. Second row passengers are treated to gobs of hip room and a cavernous 39.6 cubic inches of legroom. Behind the second row 60/40 bench seat is 32 cubic feet of cargo room, which can be more than doubled to 68.9 cubic feet when the seats are folded. In other words, there's more than enough space to haul that big screen television you've been eyeballing.

Our tester also came equipped with the aforementioned mother lode of technology. We're big fans of SYNC and Ford's intuitive hands-free calling setup, and the Sony audio system packs a serious punch. Our second attempt at MyFord Touch was a bit less confusing than the first, as we had a better handle on the four quadrants of information and their corresponding color coding. Phone connections are orange, navigation is green, entertainment is red and climate is blue. Easy-peasy, right? We also became accustomed to the five-way controls on the steering wheel, which helped us keep our hands on the wheel.

Unfortunately, we still found ourselves staring at the center console in order to sift through the heating and ventilation controls. Call us cavemen, but we prefer actual buttons and knobs to switchgear that can't be easily discerned by touch. And when we used the steering wheel controls, we found ourselves gazing into the 4.2-inch screen on the right side of the gauge cluster trying to find the optimal settings. Not good, and a bit dangerous as well. Voice control is one way around the problem, but we often struggled to find the right words to satisfy the computerized voice on the other end – a potentially frustrating distraction in its own right. Overall, we much prefer driving models not fitted with the powerful yet cumbersome interface. We're thinking MyFord Touch will take weeks for new owners to get reasonably comfortable with, and we hope the system gets easier to use with the major upgrade scheduled early next year.

All-in-all, the 2012 Edge with EcoBoost takes a terrific midsize crossover to the next level. The 2.0-liter turbo proved to be a joy to exercise, and our happiness was guilt-free thanks to impressive fuel economy for a CUV this size and weight. Mix in its attractive, broad-shouldered stance, and it's clear that the 2012 Edge deserves to be a powerhouse in the midsize crossover field. Here's hoping that MyFord Touch is friendlier in version 2.0, because it's the only major blemish here. 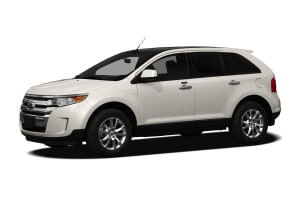