Chrysler 300 gets even cushier with new Luxury Series Despite major improvements, public perception still lingers that most American luxury sedans don't quite approach the level of refinement and equipment offered by their imported competitors. And so it follows that Chrysler models fall shy of Lincoln and Cadillac, especially because their pricing is less dear. But the latest announcement from Auburn Hills aims to close that perception – and pricing – gap ever so gently.

Whereas in the past, the Pentastar automaker may have tried to sell the buying public on terms like "Corinthian leather" to sell their luxury automobiles, today, all it has to do is call up its friends (read: corporate overlords) in Italy to get some top-quality Potrona Frau leather (usually found in Maserati and top-of-the-line Alfa Romeo models) and hand-sanded wood trim sent over. The new-for-2012 Chrysler 300 Luxury Series is visually distinguished as well by "platinum-chrome" trim on the grille, door mirrors and handles, plus 20-inch polished wheels and all the bells and whistles Chrysler can muster. Starting at $40,125, it's also a good bit less expensive than other luxury cars its size cars with similar trappings.

Couple that with what Chrysler claims is the first eight-speed automatic transmission offered on a domestic luxury sedan and available all-wheel drive, and the 300 Luxury Series could just make luxury import buyers swing by their local Chrysler dealership for a closer look. Short of that, have a look at the high-res images in the gallery and the press release after the jump for a closer look.
Show full PR text

All-new Chrysler 300 Luxury Series Sedan: The Most Luxurious and Fuel-efficient Chrysler Flagship Ever

December 27, 2011 , Auburn Hills, Mich. - Designed to be the most luxurious and fuel-efficient Chrysler flagship sedan ever, the 2012 Chrysler 300 Luxury Series combines ultra-premium leather – once limited to some of the most exotic Italian luxury cars – with world-class refinement and handling, state-of-the-art safety and connectivity features and eight-speed automatic transmission with Pentastar® V-6 engine for 31 best-in-class highway mpg.

"The new 2012 Chrysler 300 Luxury Edition is more than just our flagship car, it's the trophy for the tireless majority, an automobile designed and built to meet the most discerning of expectations," said Saad Chehab, President and CEO – Chrysler Brand, Chrysler Group LLC. "It's fitted with a paddle shifting eight-speed transmission found only on cars twice its cost, dressed with the highest grade Italian Poltrona Frau leather and finished with hand sanded real wood found only in exotic cars – all to deliver a surprising combination of hyper craftsmanship, style, technology and 'uber' best-in-class fuel economy at 31 mpg."

World-class luxury with expressive styling details
The all-new Chrysler 300 and 300C Luxury Series are the most highly appointed sedans the brand has ever offered.

Available in RWD or with the segment's most advanced AWD system, the 2012 Chrysler 300 and 300C Luxury Series models arrive at Chrysler dealerships in the first-quarter of 2012. The Manufacturer's Suggested Retail Price (including $825 destination) of these Chrysler 300 models is:

Chrysler 300's AWD system (both V-6 and V-8 engines) features a segment-exclusive active transfer case and front-axle-disconnect system to improve real-world fuel economy. No other major automotive manufacturer offers the combination of these two independent technologies. Chrysler 300's innovative AWD system seamlessly transitions between RWD and AWD with no driver intervention. When AWD is not required, the system automatically disconnects the front axle to maximize fuel economy while still providing the outstanding fun-to-drive performance and handling inherent in RWD sedans. 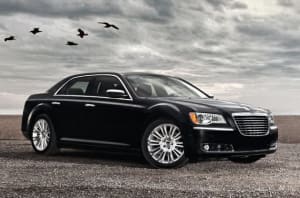