Jonathon Ramsey
Chevrolet took a brace of Sonic concepts to the 2011 SEMA show, among them four variations on themes from the Z-Spec parts bin, the Super 4 Racer for the track, and a brazen red hatch called the Sonic Boom. Based entirely around a 4,000-watt Kicker sound system, the Sonic Boom contains a high-tech head unit controlling components designed with a jet theme, and a report on the Chevrolet Sonic forum indicates it's headed for production.

There aren't many details to share, other than that Chevy has reportedly applied for a "Sonic Boom" trademark, but ChevroletSonicForum.com says their GM sources tell them that a planned retail version will take a step down from its 4,000-watt progenitor. Chevrolet has already admitted it wants to create a model selection that puts the Sonic into niche markets, and with a deep trough of Z-Spec add-ons, even as a concept the Sonic Boom doesn't appear to be too far from production-ready. 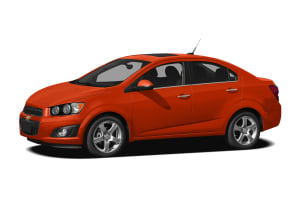