Mid-course corrections are a common occurrence when speaking about high-flying commercial aircraft and oceangoing freighters – both are often pushed off track by errant winds and powerful currents. But when it comes to automobiles, a mid-course correction can be a sign that something was wrong the moment a new model was unveiled.

The Lexus IS F was introduced at the 2007 Detroit Auto Show. The compact, high-performance sports sedan was a fresh Japanese alternative to the Audi RS4, BMW M3, Cadillac CTS-V and Mercedes-Benz C63 AMG. Yet, despite a full suite of performance enhancements that lifted it above and well beyond the standard IS, the 416-horsepower rear-wheel-drive sedan arrived lacking the refinement and performance to properly battle its competition.

Lexus reviewed the situation, noted it was not on the proper path and made a series of corrections this past year. The 2011 IS-F four-door boasts a host of improvements, both inside and out, promising a smoother ride, better handling, improved ergonomics and a freshened exterior. So is the Lexus IS F firmly back on track?
The Lexus IS-F was a big step up from its six-cylinder IS 250 and IS 350 siblings. Not only did it pack eight-cylinder power, but its brakes, suspension and tires were tuned for serious enthusiasts. Complementing the mechanical upgrades, Lexus also made a slew of cosmetic changes to the bodywork, and fitted the cabin with special sport seats and other performance kit.

While we liked the IS F when we first spent time with it in 2009, we weren't completely blown away. Aside from its lack of personality (blame Japanese sterility), much of our frustration was directed at its sport-tuned suspension, which was much too firm for our tastes. It seemed intent on rattling the amalgam fillings from our jaws. "While the Lexus sport sedan is great in the canyons, a joy to toss into the corners, straight-line driving on anything but polished marble will leave you and your occupants wondering how to turn the methodical oscillations off." We summed things up by saying, "...the IS F is an excellent candidate for electronically controlled dampers."

We weren't alone with our charges, as nearly everyone who drove the sportiest Lexus in the lineup mirrored our sentiments. Thankfully, Lexus has listened. For the 2011 model year, the Japanese automaker made a series of changes to the IS F to address many of our concerns.


The rubber is a special compound Bridgestone Potenza RE050A, with a treadwear rating of 140, formulated just for the IS F.

First, the suspension has been completely recalibrated. The dampers have been fitted with new high-performance valves and the spring rates have been revised. There is slightly more stroke up front and the rear has been firmed up. Combined with the new Torsen-type limited slip differential (added for the 2010 model year), the result is increased traction and greater stability at speed.

Next, Lexus made adjustments to the power-assisted steering system to increase its precision, improve turn-in and deliver better feel through the steering wheel. Another mechanical change for 2011 is a set of new forged aluminum wheels from BBS. The fronts, sized 19x8, wear 225/40ZR19 tires, while the rear wheels measure 19x9 and wear 255/35ZR tires. The rubber is a special compound Bridgestone Potenza RE050A, with a treadwear rating of 140, formulated just for the IS F.

The interior has received some welcomed changes too. The primary instrument cluster now features a very large analog tachometer with LED shift lights. To its right is a small analog speedometer, calibrated to an optimistic 210 mph. The four digital displays are white-on-blue LCDs, dedicated to the transmission gear, vehicle speed, oil temperature, water temperature, fuel level, and trip computer/multifunction display.

Mechanical and interior improvements aside, with the exception of the new alloy wheels, the exterior receives only one change: new LED lamps replace the incandescent bulbs in the brake and taillamps, along with the license plate pocket. More noticeable are the set of new LED daytime running lamps up front.

Under the hood, and untouched over the past several years, is Lexus' 5.0-liter V8 (2UR-GSE). The all-aluminum powerplant is a version of the engine found in the hybrid Lexus LS 600h, but this one has been tuned by the engineers at Yamaha to churn out 416 horsepower and 371 pound-feet of torque. The sole transmission, sourced from the LS 460, is a lightly modified, electronically controlled eight-speed automatic. There are large steering wheel-mounted paddle shifters (left -, right +) for manual control, or the driver may use the console-mounted PRND+/- shift gate. According to Lexus, the 3,780-pound IS F will accelerate to 60 mph in 4.6 seconds and top out at an electronically limited 170 mph (its unrestricted top speed is reportedly about 186 mph).

Our 2009 test model was silver, but this time we spent a week in a four-door dipped in dark Obsidian paint. The interior was oddly configured with black and orange leather upholstery, contrasted with blue stitching. The overall look was loud, but most people who saw it generally liked it – the IS F isn't for the timid anyway.

During our week with the revised 2011 Lexus IS F, we considered it only fair to put it through much the same routine as we had back in 2009. This included some family duty, canyon carving and a few hour-long highway jaunts. Instead of boring readers with long-winded minutia about its long list of standard luxury equipment or its cramped cabin and tight rear seats (covered in our previous review), we focused on the changes to see if the IS F is a better driver's car.

We initially kept the transmission in Drive, with sport mode off, to see how civil the IS F could be. Without breaking a sweat, the sedan effortlessly worked its way through the stop signs, signal lights and incessant intersections of suburbia, acting much like its lesser siblings. While the eight-speed transmission kept itself busy running up and down through its gears, ratio changes were smooth. The suspension was still firm, but never abusive, and the wheels tracked smoothly over nearly every imperfection while refusing to send any bad news to the cabin. It drove like, well... a perfectly mannered Lexus.

Picking up the pace, we pushed harder and ventured to the highway. Thirty minutes later, after zipping up the coast at a constant 75 mph, we were more bored than abused – a big difference from the last model that had highway occupants reaching for the Dramamine. Again, the ride was very firm, but the annoying oscillations over pavement breaks and imperfections were nearly absent.

We turned the Lexus around and chose the scenic route home, down the coast and up over the mountains. It was time to re-visit the IS F's sporty side.

There is one more significant change for 2011. Years ago, we complained about the location of the Vehicle Dynamics Integrated Management (VDIM) sport mode switch hidden behind the steering wheel. Lexus has thankfully moved the button up to front dead center, right smack on the right spoke of the steering wheel with a tell-tale blue ring around it. We couldn't be happier, as that button changes everything.


The sheer number of gears means the driver must constantly look down to see what ratio the transmission is in.

With a quick press of the right thumb, throttle response, steering response and the limits of stability control are altered. The IS F goes from being passive to immediately engaging. Mash the accelerator pedal and it climbs around the tachometer with genuine aggression. The engine note goes from a confident V8 growl to a beautifully smooth and oh-so-throaty roar as the variable valve timing takes charge. Punch the throttle around a corner and both rear wheels light up as the rear end kicks out – good ol' Dukes of Hazzard style – in splendid fun. Of course, this type of behavior isn't exactly environmentally friendly, as we burned through fuel at about 14 miles per gallon in the city (the EPA rates the 2011 Lexus IS F at 16 mpg city/23 mpg highway).

Regrettably, when the IS F is really pushed, the eight-speed automatic transmission still gets in the way. The steering wheel-mounted paddles are slow to instigate gear changes. Making matters worse, the sheer number of gears means the driver must constantly look down to see what ratio the transmission is in (is this fourth, fifth or six?). An automatic "sport-plus" transmission mode that holds gears during spirited driving would really help automate the process for the better.


The new suspension tuning improves handling, and the rear wheels stay much more firmly planted thanks to the LSD, but it was impossible to mask the IS F's nose-heavy understeer at the limit (weight distribution with the V8 remains 54 percent front and 46 percent rear). The sporty little Lexus felt more and more out of place the tighter the corners became, as the significantly narrower front tires were asked to increasingly take more of the abuse while the wider rear tires were almost underworked. Adding insult to injury, the staggered tire configuration only serves to promote even more understeer (of note, the 300-pound-lighter entry-level IS 250 also has 225s on the front).

On a positive note, we found much to like with the sturdy six-piston front and two-piston rear calipers. While we complained of weak initial bite in our last review, the 2011 model gave us plenty of braking confidence on the road and modulation was very progressive. We didn't notice any fade, and as an added bonus, the dirty brake dust was well hidden by the anthracite wheels. The electric steering also left us pleasantly surprised, as it proved both accurate and nicely weighed.

Without a doubt, the 2011 Lexus IS F is a solid improvement over its earlier models, becoming a fine sports sedan with a range of tweaks. Yet the sole entrant from Japan still falls short when pitted against the leaders from Europe and America. The CTS-V and C63 AMG each deliver more raw grunt and better overall handling, while the aging M3 remains the most agile of the group (the S4 is outgunned by all, but its price is easily the most attractive). Compared to the others, the IS F remains the powerful gentleman of the group, delivering its own balance of luxury and performance in one of the segment's smallest packages. But the improvements still aren't good enough to crown it best-in-category. 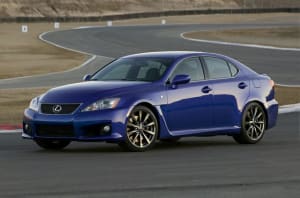