Nissan is gearing up for the Detroit Auto Show and two new concepts will grace the automaker's show stand, along with a Detroit-inspired food truck to keep the throngs satiated.

But more important than free hipster grub is the introduction of the Pathfinder Concept, which Nissan claims will inspire the next-generation utility vehicle's styling before the production model debuts later in 2012 and goes on sale towards the end of next year. Considering the current Pathfinder has been around since 2005 (with a facelift in 2008), it's due for a thorough overhaul. Persistent rumors have suggested that the next Pathfinder will eschew the body-on-frame architecture of the outgoing model in favor of a more car-like unibody.

Joining the Pathfinder Concept will be an all-electric van which we're assuming could be based on the NV series. Nissan says it's a concept that's suitable for both families and businesses, and continues its commitment to emissions-free motoring. Check the release after the break for the full details.
Show full PR text
NISSAN ANNOUNCES PLANS FOR 2012 NORTH AMERICAN INTERNATIONAL AUTO SHOW

The worldwide debut of two concept vehicles will highlight Nissan's presence at the upcoming 2012 North American International Auto Show (NAIAS) in Detroit. An all electric van concept, which underscores Nissan's leadership in zero emissions vehicles and the Nissan Pathfinder preview concept, which provides a sneak peek at the next generation of Nissan's longest running nameplate in the U.S., will be unveiled during the NAIAS press preview days, beginning Monday, January 9.

In addition to full access to Nissan's global concepts during both days of the show, media interviews will be available with Nissan team members. Nissan Chief Executive Officer, Carlos Ghosn will also be the opening keynote speaker at the Automotive News World Congress on Tuesday, Jan. 10 in Detroit.

- The Pathfinder Concept, which previews the all-new look, style and attitude that Nissan will bring to the SUV segment when the next-generation Pathfinder goes on sale in fall 2012 at Nissan dealers nationwide.

- A Nissan NV outfitted as a "Food Truck" with a local Detroit flair showcases the vehicle's flexibility and user-friendly features, but acts as a culinary cornerstone for media hospitality throughout both press days. 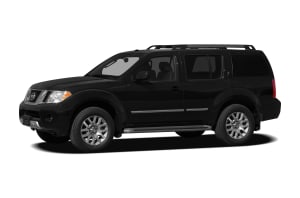