Ford is certainly embracing the weirdness of its Flex crossover – at least, in terms of design – for its 2013 model year refresh. Set to debut at the Los Angeles Auto Show next week, the 2013 Flex features a restyled front fascia that strikes us as flashier and somehow more robotic than the current model. We've seen it in person, and if we're honest, we're not sure we love it.

Ford understands the fact that not all shoppers love the Flex's exterior as a whole, but the automaker maintains that prospective buyers will like the sort of retro-modern look to the new front end. As for the rest of the Flex's design, things haven't changed too much, save the addition of some new paint colors and wheel choices, as well as the now-standard Flex badging above the grille – something previously reserved exclusively for the Titanium trim. We'll have to see what future sales numbers look like before deciding if this new schnoz is a hit or a miss, though.

Behind that new front end, the Flex receives a powertrain update: the base 3.5-liter V6 now packs 20 more horsepower – 285 versus 265 – and even with that extra grunt, fine-tuning to the powerplant has yielded one extra mile per gallon in both city and highway driving modes (18/25 mpg). Of course, customers will still be able to outfit the Flex with Ford's 3.5-liter twin-turbocharged EcoBoost V6, which carries over unchanged.

Inside, the 2013 Flex receives a refreshed dashboard and instrument cluster that incorporates the latest version of MyFord Touch. Other interior enhancements include pushbutton start, rain sensing wipers and the addition of more safety features including optional rear inflatable seatbelts and a host of collision-avoidance technologies.

• Under the hood, Flex is equipped with a standard 3.5-liter Ti-VCT V6 that delivers 20 more horsepower and projected 1 mpg better fuel economy, or the popular and fuel-efficient 3.5-liter EcoBoost® V6 engine

DEARBORN, Mich., Nov. 8, 2011 – Fans of the Ford Flex have even more to love next year with an upgraded model with a sleek new look and even more technology to make driving safer, easier and more fuel-efficient.

"Flex appeals to people who want to stand out from the crowd and has the highest retention rate of any vehicle in the Ford lineup," said Mark Fields, president of The Americas. "With technologies not found in other full-size utilities, even better fuel economy and a more modern, sophisticated look, we're offering people even more reasons to choose Flex with the new model."

The seven-passenger, three-row crossover – which debuts at the Los Angeles Auto Show this month – comes equipped with the new generation of MyFord Touch®, rear inflatable belts, collision-avoidance technologies, rain-sensing wipers, keyless entry, first-row heated and cooled seats, power-fold mirrors and an optional new Appearance Package. Plus, the base 3.5-liter engine is projected to deliver 1 mpg better fuel economy on the highway and in the city, with 20 more horsepower.

The new Flex features SYNC® with the new generation of MyFord Touch, making it easier to manage information, control features and adjust settings.

"We've listened to our customers and have improved what they love about MyFord Touch," said Kenneth Williams, systems integration engineer. "In this upgrade, the screens have a cleaner, clearer display. The words on the screens are larger and easier to read, the pressable areas on the screen look more like buttons, and we have made the functions clearer for faster navigation.

"What separates MyFord Touch is that there are multiple ways for customers to manage and control what they want through voice commands, menus accessed through the steering wheel controls, touch screen, buttons or knobs – whatever they prefer."

MyFord Touch includes two 4.2-inch screens in the instrument cluster and an eight-inch screen in the center stack. The feature pairs with the latest version of SYNC.

The base SYNC package includes:

• Hands-free, voice-activated calling via a Bluetooth®-connected mobile phone or USB-connected digital music player
• 911 Assist™, the automated emergency calling service that is free for the life of the vehicle
• Vehicle Health Report, the on-demand diagnostic and maintenance information service

The advanced restraint system is designed to help reduce head, neck and chest injuries for rear seat passengers, often children and older passengers who can be more vulnerable to such injuries.

Advances in airbag inflation and safety belt construction methods have enabled Ford and its suppliers to develop inflatable seat belts that are designed to deploy over a vehicle occupant's torso and shoulder in 40 milliseconds in the event of a crash.

The new second-row belts operate like traditional safety belts in everyday use and inflate when sensors indicate a collision event. Each belt's tubular airbag inflates with cold compressed gas, which flows through a specially designed buckle from a cylinder housed below the seat.

The ACC technology uses advanced radar to scan for vehicles in front of Flex at 20 times per second. The sensor can detect vehicles up to 150 yards away and detect speed changes as small as ¼ mph. When the system is activated, it functions like normal cruise control with the exception of being able to slow down the car when vehicles in front are detected to be slowing down. When traffic has cleared, the vehicle resumes the set speed. Four distance settings accommodate a range of driving styles and road conditions. The driver can set distance, speed and the time gap between vehicles.

Under the hood, Flex's new base engine delivers even more efficiency and performance with the addition of twin independent variable camshaft timing (Ti-VCT) to the 3.5-liter V6.

This efficient V6 allows precise, variable control of valve overlap, or the window of time in which both the intake and exhaust valves in an engine are open at the same time. By adjusting overlap continuously, the engine can operate at optimum settings for peak fuel economy or peak power output as conditions demand.

The popular 3.5-liter EcoBoost® V6 remains on the new Flex, bringing the fuel economy of V6 engines with all-wheel-drive capability and V8-like performance of 355 horsepower and 350 lb.-ft. of torque.

A key contributor to EcoBoost fuel efficiency is direct injection of gasoline. This system precisely delivers a fine mist of fuel directly into each cylinder for optimal performance, economy and emissions.

EcoBoost engines are fundamental to the Ford strategy of providing technologically advanced, high-output, smaller-displacement powertrains that deliver exceptional fuel economy and uncompromised performance for millions of drivers around the world. By 2013, more than 90 percent of Ford's North American lineup will be available with EcoBoost technology. Ford holds more than 125 patents on its EcoBoost engine technology.

Both engines are mated to a six-speed SelectShift Automatic® transmission.

The SelectShift advanced gearbox offers the driver a choice between fully automatic operation and manual control. With SelectShift with EcoBoost, paddle shifters are integrated into the steering wheel spokes. Intuitive to operate, a squeeze back on either paddle will deliver an upshift, while a gentle push forward on either paddle will induce a matched-rev downshift. SelectShift won't second-guess the driver with an override shift; manual control is truly manually controlled. The thumb shift is new for 2013 with the standard engine models.

Both engines also are made more efficient with EPAS (electric power-assisted steering). EPAS improves fuel economy approximately 4 percent and reduces emissions while improving steering performance primarily because the steering system is powered by an electric motor connected to the vehicle's battery, instead of engine-mounted hydraulic pump steering systems.

In addition, the new Flex's battery management system operates the vehicle's power supply system in a more economical manner to save fuel. The system:

Fresh new look, touches – inside and out

Flex's new front end rounds out the previously boxy edges, creating more visual harmony between the front and the rest of the vehicle. The signature Ford blue oval has been removed from the front, which now solely bears the Flex badge.

In the rear, Flex now has standard dual exhaust and available rear appliqué.

Inside the Flex customers will find a modern, sophisticated driver zone with new clusters, steering wheel and electronic finish panels, as well as new seat trim and foam.

Class-exclusives include the available second-row refrigerated console and the latest generation of MyFord Touch with SYNC.

The new Flex comes in nine exterior colors, including three new colors for the 2013 model year: Ruby Red, Deep Impact Blue and Kodiak Brown. Customers also can choose from body-color roofs, or two-tone with white, gray or black available on the Appearance Package.

Six wheel styles are available for Flex as well.

The Ford Flex is built at Oakville Assembly Complex in Ontario, Canada 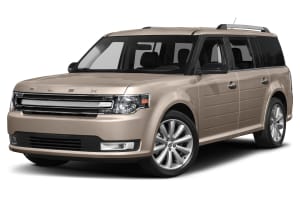