Mazda has officially released pricing on the 2012 Mazda3. The Japanese automaker has dropped the price on the Mazda3 i SV sedan, which now carries a price tag of $15,200 (*plus a $795 destination fee). That vehicle comes equipped with the previous-generation 2.0-liter four-cylinder engine under the hood, so if you want to sample the company's new SkyActiv-G 2.0-liter four cylinder, you'll need to step up to the Mazda3 i Touring at $18,450. With an Environmental Protection Agency-estimated 40 mpg and 155 horsepower, the engine is both more efficient and more powerful than its predecessor.

Mazda is also offering the Mazda3 i Touring in hatchback guise, and the added functionality will set you back $18,950, plus destination. That extra door will cost you 1 mpg highway, however. The EPA says the Mazda3 i Touring hatchback is good for 39 mpg highway. Both the hatch and the sedan may be had with either a new six-speed manual or, for an additional $850, a new six-speed automatic transmission.

Of course, we're just as interested in the Mazdaspeed3. The 263-horsepower machine will set you back $24,000, plus destination next year. Hit the jump for the full press blast.
Show full PR text
Mazda Announces Pricing of 2012 Mazda3 With SKYACTIV® TECHNOLOGY

IRVINE, Calif., Oct. 4, 2011 /PRNewswire/ -- Mazda North American Operations (MNAO) today announced pricing of its refreshed 2012 Mazda3 compact vehicle, including the first application of the brand's all-new fuel-efficient and performance-oriented SKYACTIV TECHNOLOGY. Available as both a sedan and hatchback, Mazda3 commands more than 40 percent of Mazda's year-to-date sales, and is by far the best-selling vehicle in the brand's line-up.

"The Mazda3 is the core of the Mazda line-up and continues to be the standard by which all other compact cars are measured," said Jim O'Sullivan, president and CEO, MNAO. "Because of the importance of this critical vehicle to Mazda sales success, we chose to debut our revolutionary SKYACTIV TECHNOLOGY in Mazda3, as well as bring the i SV model to market at a lower starting MSRP than the previous year."

The Mazda3 i SV sedan starts at an impressive $15,200(1) MSRP, which is a price drop from the previous model year. Styling is updated with a revised front fascia and Mazda-distinctive five-point grille opening. Inside, new cloth seats and a bold, black cabin accentuates intuitive controls and panels. Paired with the dependable 148-horsepower MZR 2.0-liter engine, the Mazda3 i SV sedan is the first stop in Mazda's performance-geared, fuel-efficient line of sporty compacts. Moving up to the Mazda3 i Sport, the 2012 model sees the addition of remote keyless entry as standard equipment. The Mazda3 i Sport sedan starts at $16,845 MSRP and is optionally available with the five-speed Sport automatic transmission. Mazda3 i SV and Sport trims are not available on five-door models.

In addition, the hatchback model will be available for the first time in the U.S. with a 2.0-liter engine, priced from $18,950 for the Mazda3 i Touring hatchback with SKYACTIV-G, and boasts an EPA-rated 39 mpg on the highway, which is best-in-class for compact five-doors. All i Touring and Grand Touring models are available with the all-new SKYACTIV-MT six-speed manual transmission or the all-new SKYACTIV-Drive six-speed automatic transmission (an additional $850 MSRP for either sedan or hatchback model).

Available in Touring and Grand Touring trims, Mazda3 s models are equipped with an MZR 2.5-liter engine that boasts 167 horsepower and 168 lb-ft of torque. Starting at $21,300 MSRP for the sedan and $21,800 for the hatchback, new standard features for s models are all-new 17-inch aluminum alloy wheels, the Mazda Advanced Keyless Entry & Start System with push-button start, a moonroof, a dual zone automatic climate control system and a Bose® Centerpoint® 10-speaker Surround Sound System with AudioPilot®. Navigation is now standard on all s Grand Touring models.

Mazda North American Operations is headquartered in Irvine, Calif. and oversees the sales, marketing, parts and customer service support of Mazda vehicles in the United States, Canada and Mexico through nearly 900 dealers. Operations in Canada are managed by Mazda Canada, Inc., located in Ontario; and in Mexico by Mazda Motor de Mexico in Mexico City. 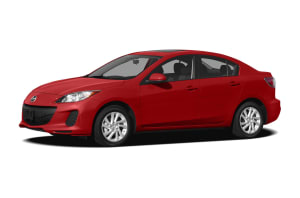