View All Specs
A 5-Door That Looks Good, Lacks Refinement

Two things have developed in the last decade: The compact segment has finally spawned vehicles we want to drive and Kia is no longer an automotive punchline. So why, when listing off top-notch C-segment vehicles like the Ford Focus, Chevrolet Cruze, Volkswagen Jetta, Honda Civic and Hyundai Elantra, does the Kia Forte rarely make the cut?

It's packing everything compact buyers are looking for, including a fuel efficient drivetrain and loads of tech and amenities that used to be reserved for far pricier models – just like the rest of the pack. What's more, it's available in five-door form and can carry an MSRP that's over $1,000 less than the competition.

So why no love for the Forte? We spent a week with the new-for-2011 Forte SX 5-Door to find out.
Our Titanium Silver tester carried SX trim and a $20,840 price tag after including the $750 freight and handling. That's a solid value for a top trim level of any vehicle in this segment, and Kia doesn't arrive at this price-point by cutting corners. Each SX model comes standard with a 173-horsepower 2.4-liter four-cylinder engine mated to a six-speed manual transmission (the six-speed automatic is $1,000 more). That's 17 more ponies than the 2.0-liter engine that comes standard in EX and LX models. Standard SX amenities include all the C-segment buzzwords like Bluetooth, USB and auxiliary input jacks, a leather-wrapped steering wheel and shift knob and a six-speaker sound system with Sirius Satellite Radio. Our tester also included a power moonroof ($750) and the leather seat trim ($1,000), which includes heated front seats and an auto-dimming rear-view mirror. For those who don't require the best of everything, there's clearly room here to trim off options and bring the price far below the $20K mark.

Kia has always featured vehicles with a very competitive starting price and a bevy of standard features, but many models didn't quite measure up in the styling department. Take the Spectra. Please. It screamed "Do you have a job? Can you afford $199 a month?"

The Forte, on the other hand, features sharp styling, especially in hatchback form. The lines are crisp and stylish, with the front end looking assertive and un-fussed-with, and the hatch equipped with attractive taillights and clean contours. Throw-in a set of 17-inch wheels mated to P215 45R17 Goodyear Eagle rubber, and the result is an attractive package, indeed. In fact, we'd go as far as to call the Forte more German than Korean when it comes to design inspiration, which should surprise nobody given the fact that former Audi designer Peter Schreyer has been at the helm of Kia design since 2006.

Mr. Schreyer and his merry band did a bang-up job on the exterior, but it doesn't quite make it to the inside. The "clean styling" theme is carried to the Forte's roomy cabin, with large buttons and knobs that are very easy to find and operate. Seats are reasonably comfortable as well, with respectable levels of bolstering up front and plenty of leg room for adult-sized rear seat occupants. Trunk space is another plus, 19.4 cubic feet of room with the second row seats in use, and more than twice as many with the back seats folded.

But while clean, simple and comfortable are admirable traits, the Forte cabin is also a bit spartan compared to the competition from Ford, Honda, Chevrolet and even Hyundai. Hard plastics abound on the doors and dash, and the center arm rest has more in common with concrete than any soft touch materials. Cabin noise is another issue, and the six-speaker sound system isn't of high enough quality to drown out the drone of radials on imperfect pavement.

More issues present themselves in the tech department. The Forte receives high marks for standard Bluetooth, USB input and an auxiliary jack, but we took issue with Kia's less than polished hands-free tech. After one of the easiest smartphone sync-ups we've ever experienced, actually using the system proved next to impossible. We tried everything. "Call home" would get us an "I'm sorry, I don't understand." We tried talking slow. We tried speaking up. Yet in all of our attempts, we only managed to connect to one call. Thankfully, we didn't have any trouble with incoming calls and the sound quality was good, which counts for something.

While the Forte's cabin was a bit less than impressive, all would be forgiven if it shines on the open road. Since we were driving the Forte in top-shelf SX trim, we were controlling a more powerful engine and a sport-tuned suspension. And as a bonus, our tester also featured the aforementioned six-speed manual, which never sucks. Well, almost never.

While the 2.4-liter engine and its 173 horsepower and 168 pound-feet of torque offered excellent acceleration and plenty of pull for most any situation, the manual transmission was very disappointing. The reason? Kia engineers came up with a Clutch Delay Valve to idiot-proof the clutch. The CDV is supposed to make driving a stick easy for newbies by ensuring that the clutch engages the flywheel at a constant rate regardless of how fast or slow the driver releases the clutch. But while the Forte may provide a friendlier third pedal for "row your own" virgins, long-time manual transmission operators will agonize over the fact that no amount of left foot finessing will lead to smooth shifts. After a week with the Forte, we began to think it was us – until we found message board after message board complaining about the Forte Clutch Delay Valve. Whew! We can see why the manual isn't offered with any Forte hatch for 2012.

Given the fact that the 2.4-liter engine was impressive, we can at least feel good about the fact that Kia also offers a six-speed automatic transmission with manual shift mode. And again, the SX trim also features a "sport-tuned" suspension, so handling should be a treat, right? You'll get few complaints from us, because the Forte's front independent suspension with MacPherson struts and rear torsion bar setup keeps things in check while keeping body roll to a minimum. There were times when the suspension felt a bit too tight, like when hitting a pothole on the highway, but that's a reasonable price to pay for sporty handling the other 99 percent of the time. Steering is solid as well, thanks to a hydraulic setup with just a touch too much power-assist, yet more feel than you should expect from an electronic setup.

However, one drawback to hydraulic steering is the slight hit to fuel economy. The Environmental Protection Agency scores the Forte at 32 miles per gallon on the highway and 22 mpg in the city. That would have been fine five years ago, but these days compacts are invading 40 mpg territory. What's worse, the 274-horsepower Kia Optima Turbo features more impressive fuel efficiency numbers. Given, the Optima Turbo is a bit ahead of its class with regards to efficiency, but there is no reason the Forte shouldn't at least match its bigger, stronger brother's 34 mpg highway and 22 mpg city numbers. And to throw a little salt on the wound, we could only muster 25.4 mpg during our week with the Forte.

Which answers our initial question: We can see why this Kia doesn't get mentioned in the same breath as the Focus, Cruze, Jetta, Civic and Elantra. While the Forte can compete on looks with any of the C-Segment elite, interior refinement and fuel efficiency still lags behind the competition. And if you study where the competition has improved the most, efficiency and refinement are at the top of the list.

Having said that, given the Forte 5-Door's impressive standard features, best-in-class 10-year warranty and sharp-looking sheetmetal, we suspect this hatchback will still draw attention from shoppers. The question is whether or not it can keep their attention in this fiercely competitive compact segment. 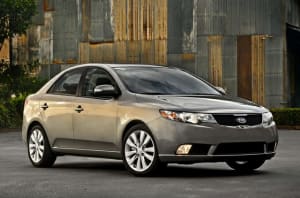