Luxury automakers like Bentley have been enjoying increasing success in the Chinese market. But with every factory owner and their cousin clamoring for a new Continental Flying Spur, some will invariably demand something a little more unique. So to satisfy its most demanding clientele, Bentley has teamed up with high-end furniture craftsmen Linley to create a special edition specifically for China.

Only ten examples of the Linley special edition will be offered in the Asian country, each outfitted with such unique features as Santos rosewood veneers around the cabin with intricate marquetry inlay, a specially crafted humidor in the rear console, branded treadplates, rhodium-coated plaque, contrasting piping on the leather upholstery and a leather bag with cashmere blanket.

We won't ask how many yuan the special edition will sell for, because even if we lived halfway around the world, this would still be far out of reach. The closest we'll get, then, is the press release after the jump and the high-resolution images in our gallery.
Show full PR text
BENTLEY LINKS WITH LINLEY

(Crewe, England, 2 September 2011) Bentley is delighted to announce a unique collaboration with British design company Linley for the creation of a limited edition of 10 Continental Flying Spurs.

The limited edition CFS models will be sold in China, reflecting continuing demand by Bentley's biggest four-door market. They will incorporate signature Linley elements designed to appeal to customers who value pedigree and lineage, handcrafted quality and peerless design.

Specially selected Linley veneers in Santos rosewood are being applied to the fascia, consol, waistrail and roof console and integrated within the cars for the first time. The veneers cover the entire wood surfaces of the model, where Bentley chestnut or walnut would normally be used.

David Linley, Chairman of Linley, comments: "It is a great honour to be working alongside such an esteemed British brand as Bentley. Our two brands share a commitment to superlative craftsmanship and design. I believe that the culmination of our efforts will result in a car that is utterly unique and reflective of the passion that both brands share for pushing boundaries of engineering and excellence."

The iconic Linley Helix motif has been taken from the distinctive Linley Helix Furniture Collection and is being set, using the highly specialised skill of marquetry inlay, into the waist-rails and picnic table of the Flying Spurs. The Helix pattern is made up of four different types of veneer which contrast with the Santos rosewood to show the wave effect delivered by the marquetry.

In addition, the rear console is being modified for a customer-commissioned Linley humidor.

Brett Boydell, senior designer at Bentley, says: "A special box has been designed by Linley which drops into a unique console. We have reconfigured the console so that the box can fit in, moving things around and creating a space. It was an engineering feat to meet the quality requirements of a Bentley and the design cues of Linley."

The project has been worked on by Mark Blanchard, Head of Design at Linley, who comments: "It has been an exciting and challenging project to work on. We designed the interior within the stringent constraints specified by Bentley, however we ensured the car exemplified Linley craftsmanship.

"The car had to look different and we wanted a strong statement inside the interior, so we chose Santos rosewood, a straight grain veneer. Bentley usually uses burr veneers for their interiors as they are more malleable around compound curves. Using a straight grain veneer was a new challenge but together we succeeded and the final results look stunning."

Stainless steel Linley treadplates will feature on the cars, as will a Linley for Bentley rhodium-plated plaque in the glove box. Modified fluting on the seats will feature burnt oak contrast stitching, with additional burnt oak hide accentuating the storage areas and door pockets.

A Linley branded leather bag with a sumptuous cashmere blanket and other Linley items such as a leather luggage tag will be included in the boot of the limited edition Flying Spurs.

In working with Blanchard, Boydell ensured that all Bentley automotive quality processes were integrated with the design work.

There were several design challenges, says Boydell. "For instance, the marquetry of the Helix pattern had to be combined with the manufacturing standards and processes which we adhere to in the automotive industry.

"The collaboration is a ringing endorsement of two great British brands working closely together. We have achieved a very high-class product which has the recognisable signs of Linley entwined into a Bentley. We are offering customers the chance to own a highly customised piece of British heritage.

"I hope the collaboration will be a springboard for future projects." 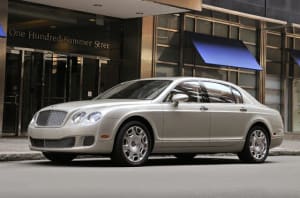