View All Specs
Acura's Best Is Still Tough To Beat

Acura has been a bit of an enigma of late. Honda's premium marque has endured its share of struggles, with new entries like the ZDX and more established models like the RL falling short of buyers' expectations. Even the mighty TL, which has been Acura's top-selling sedan for years, has seen better days.

At the height of its popularity in 2005, Acura moved 78,218 copies of its mainstream luxury sled, putting the TL behind only the BMW 3 Series and Lexus ES in luxury car sales. But then two things happened to turn the TL's world upside-down. First, vehicle sales took a dive beginning in the second half of 2008, and at the same time, Acura unveiled a newly styled TL that stoked more controversy than conquests.

To steer its bread-and-butter mid-sizer back on the right course, Acura designers nipped and tucked the TL this year to quell some of the car's disagreeable design decisions, while engineers worked to improve its already excellent driving dynamics. Has it worked? We've taken the reins of a well-equipped 2012 TL SH-AWD to see if Acura's cash cow is ready for another shot at Lexus and BMW.

Our Forged Silver Metallic TL tester came equipped with Acura's Super-Handling All-Wheel Drive and six-speed manual gearbox. Every Acura comes equipped with a veritable treasure trove of standard equipment, including a power moonroof, Xenon headamps, heated front seats, leather, automatic climate control and Bluetooth. Our tester also featured the Technology Package, which adds perforated Milano premium leather, a rearview camera, navigation with real-time traffic and weather and an ELS Surround Sound system designed to rock your world. Or your Enya. Whatever you're into...

That's a lot of kit for $42,885, but to persuade luxury car buyers to experience the TL, the exterior needed a bit of work. When looking at the TL from 50 feet away, it's difficult to discern where Acura designers have made improvements, but somehow, the TL looks more agreeable than last year's model. Gone is the awkward front fascia that gave the TL its vertical appearance. In its stead is a softer, gentler face that swaps a sharp, toothy grille in favor of a less blunt beak. The front bumper has also been revised, along with the headlight design and fog lamp setup. As a result, the 2012 TL appears lower and wider, even though the sedan is almost dimensionally identical to the 2011 model.

The updated TL's cabin looks nearly the same as the 2011. That's not necessarily a bad thing, since the TL's confines already sported a cockpit-like architecture and plenty of richly textured, soft touch materials. And the best provisions of all are, of course, reserved for the steering wheel and shift knob, where the hands spend the most time.

We're also fans of the TL's well-bolstered front seats. These leather-laden thrones kept our butts planted during aggressive driving, while also coddling at cruising speeds on Michigan's highways and bi-ways. Like the last TL, this model continues to feature plenty of room for passengers, with 42.5 inches of front leg room and 36.2 inches for back seat occupants. Trunk space continues to be a problem, though, as the 12.5 cubic feet of storage space in our all-wheel-drive tester (front-drive models eke out 13.1 cubes) is among the worst in this class. At one point, we were stunned to find that the trunk of the TL couldn't swallow a small cooler, a moderately sized suitcase and a handbag filled with beach accessories. Then again, there's always the Acura TSX Sport Wagon for an enlarged family of four.

Acura claims to have done extensive engineering work to make the cabin of the TL quieter, and our muted week with this Acura proves their efforts weren't in vein. But while interior din has been curbed, the din of switchgear has not. The TL continues to employ a multitude of knobs and buttons on the center stack and steering wheel. We're not sure we'd ever be able to intuitively adjust the temperature or change the radio station without taking our eyes off the road. Another issue is Acura's continued use of a navigation joystick instead of a touchscreen setup. On several occasions, we inadvertently hit the protruding, oddly placed joystick when shifting from second to third, altering the nav screen.

The TL comes with one of two V6 powertrains, starting with a base 3.5-liter engine good for 280 horsepower and 254 pound-feet of torque. The SH-AWD-equipped TL boasts a larger 3.7-liter with 305 horsepower and 273 lb-ft of twist.

You won't find direct injection or a turbocharger in the lineup, but you will experience one sweet-sounding growl once the push-button start is pressed. It's almost too bad that Acura has opted to spend money to reduce the intrusion of outside noise. Now we have to roll down the windows to hear more of this melodic powertrain.

Some would say that the 280-hp 3.5-liter V6 engine is more than powerful enough for the vast majority of luxury car owners. No arguments here, but to check off the box for a precise, short-throw six-speed manual, buyers will have to opt for the 3.7, making it the enthusiast engine of choice. The trot to 60 takes about 5.5 seconds, thanks in part to Acura's amazing all-wheel drive system. The SH-AWD system provides full-time, four-wheel traction that can route 70 percent of the available torque to the rear wheels and up to 100 percent of the rear-wheel twist can be directed to the left or right wheel for optimal cornering. Hammer the throttle from a dead stop, and the Michelin P245/45 R18 96V high-performance all-seasons will struggle to make a sound. All that power goes straight to the pavement... and that makes us happy.

The TL has always been a sure handler, and that doesn't change with this updated model. The front suspension consists of an independent double-wishbone with coil springs and stabilizer bar, and the rear setup is a multi-link affair with coil springs and a stabilizer bar. This setup, when coupled with all-wheel drive, results in prodigious grip and plenty of feel through your posterior.

Conversely, to help improve fuel economy, Acura has turned to an electronic power steering setup. The result is a wheel that feels a bit vague, often giving more power assist than is necessary. Speaking of economy, the Environmental Protection Agency contends that the AWD-equipped 2012 TL averages 26 miles per gallon on the highway and 18 mpg in the city. Our time with the TL didn't quite live up to those numbers, with a combined 19.7 mpg in mixed driving. We can live with that figure, though, considering the workout our TL put up with.

After a week with the refreshed TL SH-AWD, it's obvious that Acura has taken measures to fix what was broken without hurting what already worked. Could the mid-cycle refresh have gone farther to make the TL a bit more attractive? Sure. Could the interior have benefited from a few more changes? Maybe. Is the sharp-handling chassis and silky smooth powertrain still among the best in the class? Absolutely.

In aggregate, Acura started with a very competent luxury sport sedan and, over the last year, made it more attractive, improved its efficiency and increased its driving dynamics. That may not be enough of an overhaul to bring sales of the TL back to 2005 levels, but the improvements should be significant enough to keep this Honda on your shopping list. 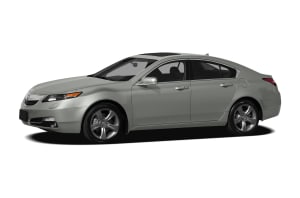