Honda is recalling 2011 CR-Z hybrids with manual transmissions to update software that controls the hatchbacks electric motor. This recall is part of a global campaign that involves nearly 960,000 vehicles, including the not-for-U.S.-consumption Honda Fit Hybrid, for problems with its window switch and powertrain. The CR-Z recall affects 5,626 vehicles in the U.S. and 26,000 worldwide.

Honda reports receiving complaints of roll-away issues that can occur if the engine stalls when the vehicle's battery is in a "very low state of charge." Honda say it's possible for the CR-Z's electric motor to rotate in the wrong direction, causing the vehicle to slowly roll in an "unexpected direction" if the brakes aren't engaged. This, says Honda, could potentially lead to a crash.

Honda says a simple software update will fix this problem and the automaker will reportedly begin notifying owners of affected vehicles in late September. No injuries or deaths have been reported related to this recall. 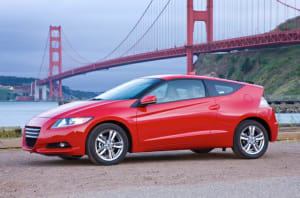