Eric Loveday
The 2011 Chevrolet Aveo hatchback, to be sold in North America as the Chevy Sonic starting this fall, has received a five-star safety rating from the European New Car Assessment Program (Euro NCAP).

According to NCAP, the Aveo hatchback scored 85 out of 100 points, which places it among the top performers in the NCAP's supermini segment. In the key areas of adult and child occupant protection, the Aveo scored 95 and 87 percent of the maximum, respectively. In pedestrian safety, the Aveo didn't fare too well, scoring only 54 percent, but in the NCAP's safety assist category, the Aveo hatchback emerged from the tests with a segment-leading 93 percent.

In North America, the Sonic will come equipped with 10 standard airbags and will feature electronic stability control, anti-lock brakes and electronic brake force distribution. Since Euro NCAP's testing methods are considered to be the most rigorous in the world, we'd assume the Sonic will fare above average in NHTSA and IIHS testing too. Hit the jump to watch a smashing clip of the Aveo.

ZURICH -- The new Chevrolet Aveo hatchback, which will be sold as the Chevrolet Sonic in North America beginning this fall, received a top five-star safety rating from the European New Car Assessment Program (EuroNCAP), which released its latest results this week.

According to EuroNCAP, the Chevrolet Aveo hatchback secured 85 out of 100 points,which places it among the best in its segment.

In the key areas of adult and child occupant protection, the Aveo, achieved 95 and 87 percent of the maximum possible score, respectively.

In North America, the Sonic is equipped with 10 standard airbags that are connected to the sensing and diagnostic modules mounted into the centerline of the car. It also features a child-seat latching system. The car's active safety systems include electronic stability control, traction control, a four-channel anti-lock braking system with brake assist, and electronic brake force distribution.

The new Aveo was launched in Europe in spring 2011. It is part of a wave of new-car launches in Europe for 2011, Chevrolet's centennial year. Other entries in Europe include the new Captiva, Cruze hatchback, Camaro Coupe and Convertible, Corvette Grand Sport and Chevrolet's multiple award-winning electric car with extended range capability, the Volt. 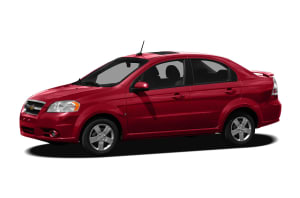