Hyundai promotes its redesigned 2011 Elantra as a 40-mpg rated subcompact no matter how it's optioned. Meanwhile, Ford can only say, officially, that the 2012 Focus cracks the coveted 40-mpg mark when equipped with the SFE (super fuel economy) package and six-speed automatic transmission. This must upset Ford, so to prove that the Focus is a fuel-sipping hatch regardless of its options, the Blue Oval organized a media drive in Romeo, MI recently.

Ford engineers had automotive industry reporters drive the Elantra at a steady 45 miles per hour around its 2.5-mile track in Romeo. Then, reporters hopped in a Focus (one not equipped with the SFE package) and lapped the track at the same speed. Ford says all conditions were equal and that an engineer in the backseat of each vehicle monitored fuel economy.

After dozens of drives, the results showed that the average fuel economy of the Focus was 40.4 mpg versus the Elantra's average of 37.8 mpg. So, Ford seems to have proved that, when it comes to fuel economy, the Focus is more efficient at a steady 45 mph than the Elantra. Do these results matter in real-world driving? We haven't a clue. 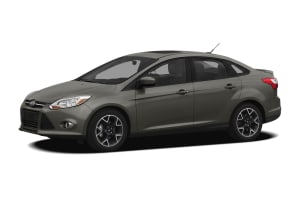