Acura has decided to spice up its entry-level TSX sedan, and this, the 2012 Special Edition, is the end result. No, there isn't any more power on tap, but some styling tweaks do give the TSX a sportier look. A more aggressive front spoiler and rear fascia lend an air of extra sportiness, and compliment the updated side sill. New 17-inch alloy wheels now feature a polished finish with a dark gray background.

Inside, Acura has pumped up the interior with black suede inserts on the seats that's contrasted by red stitching. More of the red color makes its way to the steering wheel and shift knob, as well as the lighting of the gauges, footwell and cabin. That footwell area also see the addition of aluminum pedal covers.

The automaker says that the TSX Special Edition was designed to "evoke the fun-to-drive four-cylinder Acuras of the past," so the 2.4-liter inline-four is the only engine available. Both a five-speed automatic and six-speed manual transmission are available.

TORRANCE, Calif.– Continuing the celebration of its 25th anniversary, Acura today announced the availability of a new version of the popular TSX sports sedan for the 2012 model year. Designed to evoke the fun-to-drive 4-cylinder Acuras of the past, the TSX Special Edition will add even more sportiness to the TSX lineup thanks to numerous exterior and interior upgrades for Acura's entry-level sedan.

"The Acura TSX has long been known for its high-revving 4-cylinder engines and sporty driving nature," said Jeff Conrad, vice president of Acura sales. "With the new Special Edition, the TSX becomes even more youthful and sporty in character, furthering its appeal to performance-minded buyers."

The 2012 TSX Special Edition package consists of numerous upgrades to the exterior including a more aggressive front spoiler, a new rear bumper fascia, unique side sills and an exclusive "Special Edition" badge on the trunklid. Finally, the TSX's 17x7.5-inch, 5-spoke aluminum wheels will feature a polished finish with dark grey background, unique to the Special Edition model.

Inside, the TSX Special Edition makes use of sport-minded appointments including exclusive seating surfaces with perforated black Lux Suede® inserts with red backing. Unique red stitching, used for the seats, steering wheel and the shift knob, combines with red lighting for the instrument cluster gauges, overhead lighting and footwell lighting. Adding more appeal to the driver's footwell are aluminum pedal covers with a race-inspired look. Rounding out the Special Edition's interior upgrades is the use of bright silver plating for the steering-wheel-mounted paddle shifters along with black headliner material (standard TSX have grey headliner material).

The TSX Special Edition package makes use of Acura's acclaimed K24 2.4-liter 4-cylinder engine and will be available with either the close-ratio 6-speed manual or Sequential SportShift 5-speed automatic transmissions. The TSX Special Edition will go on sale in late September and will make its public debut at the Orange County International Auto Show on September 22nd. 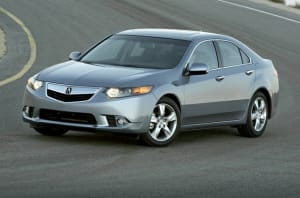