Eric Loveday
Communauto, North America's oldest car sharing company, has made a commitment to add 50 Nissan Leafs to its Quebec- and Montreal-based fleets by early 2012. Right now, Communauto has 15 Leafs ready for car-sharing duty, with the rest of the electric hatchbacks expected to arrive within the next six months.

Nissan will deliver Leafs to Communauto under terms laid out in a Memorandum of Understanding (MOU) the automaker signed a while back with the government of Quebec. The MOU calls for the electricity needed to charge the Leafs to come only from renewable energy sources. Thus, the electricity will come from Hydro-Quebec, the world's largest hydroelectric utility company. Thierry Vandal, chief executive officer of Hydro-Québec, stated, "When it comes to transportation, electricity is the way of the future." But that's expected of the CEO of a utility with over four million customers, right?

Now, the big question here: what is it that makes the Leaf a "she," as the image above (taken from the Communauto website) claims?

*UPDATE: As reader Gaston B. explains, in French, cars are considered female, and this was carried over into the translated version.
Show full PR text
Quebec Firms Launch Nissan LEAF Carshare Service

QUÉBEC - Communauto, Hydro-Québec and Nissan Canada are proud to announce the launch of the largest North American all-electric carsharing service, and the first of its kind in Québec. The project will be rolled out until early 2012 , with 50 all-electric Nissan LEAFs added to Communauto's fleet, including 15 available today.

"With this project, Communauto is renewing the innovation of carsharing and its ability to offer residents of Québec a new way to have access to a car, while taking advantage of the latest environmental technologies," said Benoît Robert, president and CEO of Communauto. "Starting with our nearly 25,000 members, all citizens of the Québec and Montréal areas will have access to personal electric mobility for only $37 a year, even if they don't have a parking space to charge the vehicle. Another advantage of carsharing!"

This project was made possible with the support of many partners. The Québec government and Hydro-Québec paved the way for the priority delivery of the Nissan LEAF through their commitment to electric mobility and the signing of a memorandum of understanding with Nissan. The Québec government supported this project through credits and subsidies for the purchase of electric vehicles. Hydro-Québec is providing financial and technical support for the charging infrastructure being implemented.

"Today we are taking an important step towards the electrification of ground transportation and the fulfillment of our Electric Vehicles: 2011-2020 Action Plan launched last April. I am proud of our leadership's ability to create favourable conditions for the deployment of electric vehicles. Since 98% of our electricity comes from clean, renewable resources, Québec presents a number of advantages for the introduction of electric vehicles. The integration of these vehicles into Communauto's fleet is another step that confirms Québec's leadership in energy and the environment," said Raymond Bernier, Member of the National Assembly on behalf of Nathalie Normandeau, the Minister of Natural Resources and Wildlife.

"Hydro-Québec has been collaborating with Communauto and Nissan for over a year to make this ecologically responsible initiative possible. We are very pleased to be associated with this project that will significantly contribute to the development of electric vehicles in Québec, while offering users our clean, renewable energy. Carsharing will allow a large number of drivers to appreciate electric-powered vehicles," added Pierre-Luc Desgagné, Senior Director - Strategic Planning and Government Affairs, Hydro-Québec.

A number of organizations contributed to this projects by participating in the implementation of charging stations, a prerequisite to making electric vehicles available to all: the cities of Québec and Montréal, the Société Parc-Auto du Québec (SPAQ), the Desjardins Group, Ivanhoé Cambridge, Stationnement de Montréal, the Monastère du Saint-Sacrement in Montréal, the Société Immobilière du Québec, the Institut national de la recherche scientifique, the Université de Montréal and the Productive House project.

The president of the Réseau de transport de la Capitale, Raymond Dion, said, "For the city of Québec, carsharing presents a solution in personal mobility for citizens who need a car occasionally. Communauto offers an innovative, proven and cost-effective solution. The arrival of electric vehicles brings an additional advantage. In fact, the Réseau de transport de la Capitale established the Écolobus service in 2008. With its non-polluting and ultra-quiet electric buses, Écolobus contributes to preserving the quality of Vieux-Québec's environment. Implementing this type of vehicle is in line with the city's desire to protect the environment, offer more sustainable modes of transportation and improve the quality of life of its citizens."

Jacques Dorval, president and CEO of SPAQ said, "We got involved in this project to make the Communauto experience even more enjoyable and, especially, more efficient. We welcome Communauto members 24 hours a day, 7 days a week to charge their vehicles safely."

The first six electric vehicles available in the city of Québec will be located in the following parking lots: at City Hall, at SIQ in Place d'Youville, at the INRS in Saint-Roch and at Ivanhoé Cambridge's Édifice de la Haute Ville.

The scientific follow-up of this project will be provided by the Centre National du Transport Avancé in Saint-Jérôme. In addition to giving priority to the delivery of these vehicles, Nissan Canada will maintain its contribution with technical support either directly or through its car dealers: Nissan Park Avenue in the Montréal area and Nissan Beauport in the Québec area.

"Electricity is the new fuel for vehicles, and drivers now have the freedom to choose a future free of emissions and fossil fuels," said Allen Childs, president of Nissan Canada Inc. "The delivery of the first Nissan LEAFs in Québec is only the beginning of the movement towards sustainable mobility in Canada and we are very pleased to be associated with Communauto. It will allow the greatest number of Québec drivers to have access to this truly innovative vehicle through carsharing."

Communauto, the oldest carsharing service in North America, is a company with an urban, social and environmental mission that serves more than 25,000 users thanks to a fleet of some 1,150 self-service cars, available 24/7, in combination with public transit and active transportation. Communauto vehicles are found in more than 370 stations, located in Montréal, the city of Québec, Gatineau and Sherbrooke. For more information about Communauto and its network of parking stations, visit: www.communauto.com.

Hydro-Québec generates, transmits and distributes electricity. Its sole shareholder is the Québec government. It uses mainly renewable generating options, in particular hydropower, and supports the development of wind energy through purchases from independent power producers. It also conducts research in energy-related fields, such as energy efficiency. For more information on Hydro-Québec, please visit www.hydroquebec.com. For details on its plans for transportation electrification, visit www.hydroquebec.com/transportation-electrification.

Nissan Canada Inc. (NCI) is the Canadian sales, marketing and distribution subsidiary of Nissan Motor Limited and Nissan North America, Inc. With offices in Kirkland (QC), Vancouver (BC), Mississauga (ON), NCI directly employs 250 full-time staff. There are 150 independent Nissan dealerships and 29 Infiniti retailers across Canada. Nissan is dedicated to improving the environment under the Nissan Green Program 2010, whose key priorities are reducing CO2 emissions, cutting other emissions and increasing recycling. More information about Nissan in Canada and the complete line of Nissan and Infiniti vehicles can be found online at www.nissan.ca and www.infiniti.ca. 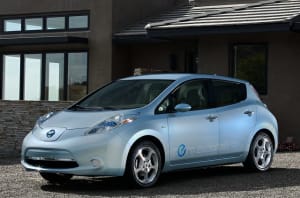