If you own a Cadillac Escalade, you better keep one eye on it at all times. According to the Highway Loss Data Institute (HLDI), the Escalade is still the apple of a car thief's eye. The large luxury SUV is six times more likely to be plucked away by thieves than average. If you happen to have the truck-like EXT Escalade, you're in even worse shape since 14 out of every 1,000 vehicles insured wind up with a theft claim.

On the flipside, if you're the proud owner of an Audi A6 then you can rest easy. Car thieves aren't hunting for your particular mid-size luxury sedan. Want to know what vehicles round out the top and bottom ten from the perspective of a car thief? Well, at least according to the HLDI. Click past the jump for the full press release.

ARLINGTON, VA - The Cadillac Escalade is more than 6 times as likely as the average vehicle to be targeted by thieves and has overall theft losses more than 10 times as big, an analysis of insurance claims for 2008-10 vehicles by the Highway Loss Data Institute (HLDI) shows.

The Escalade for years has dominated HLDI's list of vehicles with the most theft claims, and 4 versions of the luxury SUV appear at the top this time. The Escalade EXT, which has a pickup bed, is ranked worst, with more than 14 claims per 1,000 insured vehicle years, or more than 8 times the average. An insured vehicle year is 1 vehicle insured for 1 year, 2 for 6 months, etc.

Pickups are another favorite of thieves, and the Ford F-250 crew cab 4-wheel-drive comes in second to the Escalade for the most theft claims, with other models ranking high on the list. Overall, pickups have much higher theft losses than passenger cars and SUVs ($24 per insured vehicle year versus $9 and $12, respectively), though from 2007 to 2009 pickup losses fell substantially. The decrease may be because of the fact that ignition immobilizers, which prevent vehicles from being hot-wired, recently have become more common in pickups. The technology became widespread in cars and SUVs earlier.

Still, immobilizers can't prevent all types of theft, and even Escalades have them as standard equipment. Moreover, the devices don't affect theft of property from a vehicle, which also is reflected in the rankings.

"Immobilizers are a good deterrent against joy-riding teenagers, but professional thieves can easily haul away an SUV on a flatbed truck," says HLDI senior vice president Kim Hazelbaker. "A pickup that can't be driven away is still vulnerable to having tools and cargo snatched from its bed."

The most targeted car, excluding luxury and sports cars, is the Chrysler 300. That's followed by models known for their powerful engines, including the Chrysler 300 HEMI, the Dodge Charger HEMI, and the Nissan Maxima.

The list of vehicles with the lowest claim frequencies is topped by the Audi A6 4-wheel-drive sedan and the Mercury Mariner, a small SUV. Each has a claim frequency of 0.5 per 1,000 insured vehicle years. The Audi has a much higher average loss per claim, so its overall average theft loss ($8) is much higher than that of the Mariner ($1).

HLDI's theft numbers differ from reports by other organizations because they are based on the number of insured vehicles on the road. In contrast, information published by the National Insurance Crime Bureau simply lists the most frequently stolen vehicles. As a result, the list usually reflects the most commonly driven vehicles, not how likely a vehicle is to be targeted.

The National Highway Traffic Safety Administration is required by law to report theft data, but light-duty trucks with gross weight ratings of more than 6,000 pounds - a category that includes the Escalade - are excluded. The agency looks at thefts in a single calendar year of vehicles from that model year. It measures exposure by the number of vehicles produced.

HLDI's data come from insurers representing about 80 percent of the market for privately insured vehicles. The data don't include information on thefts of vehicles that aren't insured or are insured by nonreporting companies. They also don't distinguish among thefts of entire vehicles, vehicle parts, and vehicle contents. HLDI is an affiliate of the Insurance Institute for Highway Safety.

We continue to deploy theft deterrent technologies on the Cadillac Escalade to address the high rate of theft of this popular luxury vehicle. Escalade has a sophisticated cryptographic immobilizer system, called PASS Key 3+, that has been proven to greatly thwart drive-away thefts. Since 2010, Escalade has included a steering column lock system to help prevent other theft conditions, including push away theft.

"We are currently implementing four new pieces of 'armor' on Escalade intended to reduce vehicle thefts, particularly those called push away," said Bill Biondo, GM's global lead, vehicle theft prevention. "We are committed to beating the thieves and expect these new theft deterrent systems to greatly reduce the Escalade's rate of theft and lower its position on HLDI's list."

"Beyond developing theft deterrent systems and technologies, we continually work with law enforcement agencies across the country to help educate these agencies on our systems but equally important is to learn from them what is actually occurring in the field so we can continue to develop effective theft deterrent solutions for our customers," said Biondo.

Additionally, OnStar is available on Escalade and many other GM models with the capability to locate stolen vehicles, immobilize them to prevent the thief from restarting the vehicle, and slow the stolen vehicle once police are on the scene which can help prevent high-speed chases. 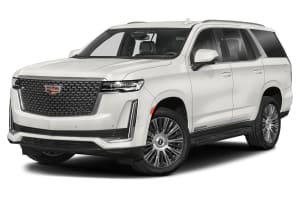