GMC back atop HD truck towing and payload ratings Mustang, Camaro and Challenger owners use statistics like 0-60 times and quarter-mile trap speeds to prove why their chosen muscle car is better than the rest. If there's any other segment of the industry where numbers mean everything, it's heavy duty pickups.

Need proof? Check out the latest set of towing and payload ratings for the HD versions of the Chevrolet Silverado, Ram, Ford F-Series and GMC Sierra. For what it's worth, the GM twins officially have the highest set of numbers with up to 23,000 pounds of capacity when trailering a fifth wheel, 18,000 pounds with a conventional trailer and 7,215 pounds of payload capacity when properly equipped.

So, GM's got the bragging rights... for now. We expect Ford and Ram to counter GMC's latest statistics with revised ratings of their own, after a few small tweaks allow them to earn back their place atop the HD standings. After all, it's been happening exactly this way for the last several years.

For a fun little rundown of how the three American pickup makers play the game of one-upmanship, we suggest you check out this story from our friends at PickupTrucks.com. Speaking of which, after that website's latest HD pickup comparison, at least GM has earned the right to boast by taking top honors against the F-Series and Ram. 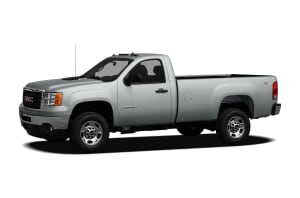