Aaron Richardson
Emanuele Pirro has spent the last 17 years as an Audi works driver, so it's safe to say he knows his way around Quattro-equipped iron. Not only has Pirro had the pleasure of first crack at the latest gems from Audi in that time, he's also had the pleasure of winning three LeMans victories behind the four rings.

During the course of over four videos produced last week for Audi's social media outlets in the United States, Pirro details the limited-edition 2011 Audi R8 GT. Starting with the car's 560-horsepower, V10-motivated 3.6 second 0-60 time, Pirro takes four episodes to explain why you want need an R8 GT, as if you didn't already know. Included in that long list of reasons are the carbon fiber spoiler and front splitter. Did we mention this beast is 180 pounds lighter than the regular car?

For Pirro's full impressions of the baddest R8 available, click past the jump.


Show full PR text
Forget the sharks. Audi will offer its fans R8 GT content with real bite next week
Cable television is replete with specials that concentrate viewer attention on topics as diverse as sharks and cupcakes over the course of seven days. In that spirit, Audi is declaring next week "R8 GT Week" to celebrate the arrival of a limited-edition supercar with real bite and a profile that can only be described as sweet.

Pirro offers a unique perspective on Audi performance since he won three of his five 24 Hours of Le Mans victories while driving the Audi R8 LMP1 prototype racecar.

"When I drove the R8, I thought it was impossible to produce something better," Pirro said. "Well, Audi surprised me once again by building the limited-edition R8 GT. The result is a fantastic car both on the race track and on the road which is very difficult to achieve. It is a fantastic pleasure to drive this car."

The video series will be featured across the rapidly growing Audi USA social media platforms. Next week's video series will be hosted on the Audi R8 Facebook page (http://www.facebook.com/pages/Audi-R8/225986164093977) where previews of Audi R8 GT segments can be found today.

Additionally, each installment will be posted on the Audi USA YouTube channel (www.youtube.com/audiusa). Regular updates will be featured on the @audi Twitter profile, and downloads will be available at www.audiusanews.com.
Overall, the Audi R8 GT represents the engineering attention to detail for which Audi is known. It joins the R8 V8 and R8 V10 Coupe and Spyder models as the pinnacle of Audi performance. Production is limited to 333 units worldwide with only 90 vehicles destined for the U.S., making the Audi R8 GT an attractive performance machine for collectors and enthusiasts alike.

With pricing that starts at $196,800 (excluding $1,250 destination charge, taxes, title, options and dealer charges), the 2012 Audi R8 GT receives significant exterior modifications aimed at enhancing its already stellar handling, and it is powered by a modified 5.2-liter V10 FSI engine that produces 560 horsepower (35 hp more than the R8 Coupe 5.2 quattro and the R8 Spyder 5.2 quattro). The 2012 R8 GT employs the R tronic sequential manual transmission. This pairing produces a top track speed of 199 mph, and a 0-62 mph time of 3.6 seconds. Overall, the Audi R8 GT will provide drivers with high lateral acceleration and a low center of gravity.

The signature Audi ASF® lightweight construction of the Audi R8 GT, combined with extensive use of lightweight carbon fiber body parts reduces the weight by approximately 180 pounds when compared to the Audi R8 Coupe 5.2 quattro. Key carbon fiber components are the rear hatch, spoiler and diffuser.

The Audi R8 GT continues the heritage of mid-engine configuration with quattro® all-wheel drive that has distinguished all R8 variants. The axle load distribution of the R8 GT will be 43/57 front/rear. Integrated into the front differential is axle-load-optimized torque split with self-locking differential in the rear axle.

To convey its limited-edition nature, the Audi R8 GT will come with a variety of exclusive interior and exterior touches. Each car will have a numbered gearshift knob. The instrument cluster will be white with the R8 GT logo and the interior will feature carbon matte inlays. The seats, headliner, steering wheel and handbrake lever will be black Alcantara® with contrast stitching. Door sills will include aluminum inserts with the R8 GT logo.

The limited U.S. allotment of 90 Audi R8 GT models is sold out, adding to the ongoing momentum for the supercar lineup, which includes the original Audi R8 4.2 quattro® equipped with an eight-cylinder engine, the V10 Audi R8 5.2 quattro and Spyder versions in both engine sizes. In July 2011, Audi R8 sales overall increased 128.1%, boosting year-to-date sales by 57.7%. 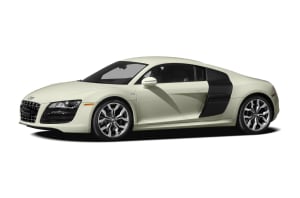