View All Specs
A Minivan-Shaped SUV Minus The Ground Clearance

The last-gen Nissan Quest minivan was an oddball. It had good power, handled quite well, and was unconventional-looking. The thing is, unconventional isn't necessarily the best thing for a vehicle as mainstream as a minivan. Nissan pulled the plug on the funky-looking Quest after the 2009 model year, promising to return after skipping 2010.

So here we are with the new 2011 Nissan Quest, which is essentially a less dramatic-looking Nissan Elgrand (as it's known in Japan). It arrives in a minivan segment that's as competitive as ever and stacked with new products. The excellent 2011 Honda Odyssey and Toyota Sienna lead the class. Chrysler punted the gimmicky in-car card tables, banished the trashy interiors, and released the greatly improved Dodge Grand Caravan and Chrysler Town & Country. We grabbed the keys to a new Quest to see whether it really hangs with the A-listers.
Before getting its visa to head Stateside, Nissan tweaked the Quest's looks for American consumption. Instead of the Elgrand's chromed-out, Silver Samurai face and full-width taillamp strip, the Quest gets a pointier, more subdued nose and taillamps shaped like flower petals. If the Elgrand's looks are suited to Japanese dads, then its Questification seems geared toward American moms.

The rest of it? As you've probably surmised from the photo gallery, it's big. A fast windshield angle and some well-placed creases in the bodywork work to downplay the visual bulk a little. Overall, the look is more aesthetically pleasing than the kaleidoscopic sheetmetal of the Honda Odyssey or the generic wrapper Chrysler's breadboxes are stuck with until their next full redesign. The Toyota Sienna is arguably the best-looking van, but we'd slot the Nissan into the #2 position.

Our actual tester was a fully-loaded Quest LE, while the one you see in these photos is a very well-equipped SL that we shot on the sunny California coast. The only noteworthy differences between the two are power third-row seat release and return buttons on the LE (in addition to the manual release straps), and the optional dual sunroof setup the LE was equipped with. The latter is a cool feature with two full-sized roofs that open independently of each other and are spaced so that the flip-down, 11-inch DVD screen occupies the real estate separating them. Power sliders and a low step-in height make climbing in and out of the Quest easy, regardless of passenger age.

Inside, there's (ideally) room for seven: two captain's chairs up front, two more in the second row, and a 60/40 split third row. While there are three headrests and seat belts in the way back, stuffing three adults back there may not so comfortable, especially for the one stuck in the middle. Kids, though? Mine preferred to clamber back there, given the choice. And there are enough cup/bottle-holders to accommodate more than double the Quest's seating capacity. Plan your road trip's restroom stops accordingly.

Overall, the interior presentation is slick. The instrument panel design, materials and layout are the best-looking of any minivan available. We can't speak to the lower-priced trim levels, but when equipped with all the toys like the two testers we had, the Quest's ambiance is impressive, with big, brightly-illuminated gauges, an uncluttered center stack, and tasteful woodgrain trim spanning the instrument panel. Combine that with the classy leather, complete with contrast piping, and an Infiniti logo wouldn't seem out of place on the steering wheel.

The Quest LE we tested had an eight-inch LCD screen (the SL's is seven inches) and full-boat infotainment system, including navigation, 13-speaker Bose audio, hard-drive music storage, a USB jack with full iPod compatibility, satellite radio, Bluetooth, etc. We didn't store any tunes locally and stuck with an iPhone and XM stations. We even used the nav system for a road trip down to a friend's birthday party and everything works exactly as advertised. Nissan's onscreen interfaces are well organized, and the hard controls mounted directly below the main screen are intuitive. As these things go, it's one of the best setups out there.

The instrument panel's layout does have one annoying flaw. The shifter is mounted low, adjacent to both the radio and climate controls. When in Drive, it blocks your view of those features and forces you to reach around it to operate them. This is less a big deal with the climate controls, as we generally set it and forget it, but using the nice, old-fashioned tuner dial to hunt for stations that weren't entered as presets (you can surf those using the wheel-mounted controls) was more cumbersome than necessary.

On the road we found the Quest endearing. The direct-injected 3.5-liter VQ35DE V6 is paired with a continuously variable transmission, and the 260 horsepower and 240 lb-ft of torque available are more than able to move this 4,500-pound porker out of its own way. Considering its size and heft, the Quest is pretty quick when it needs to be, and while it's hardly a vehicle that asks to be driven with anything resembling aggression, it exhibits more balanced handling than we expected. Not sporty, but not sloppy, either. Stomp on the gas, and the VQ's snarl finds its way into the passenger cabin, but when it settles in at highway speed, its unobtrusive, and the interior's quiet. Nissan has mastered the CVT, and it's a solid, smooth-operating partner to the VQ here. The combination is EPA-rated at 19 miles per gallon in the city, 24 highway and 21 combined. In the week we had the Quest, we averaged just under 20 mpg over 420 miles or so, with about three-quarters of that being highway driving.

Forward visibility is fine, but our tester's backup cam was a most welcome addition. Nissan should offer the excellent around-view system available in some Infiniti models. It would be ideal in this application, not only for the sake of convenience, but also as an added measure of safety when backing out of families' driveways. The Quest's high beltline and pronounced pillars make the over-the-shoulder view a bit dodgy, but it's equipped with rearview mirrors fit for a Peterbilt, and they effectively mitigate the problem.

Where Nissan really gambles, and loses, is cargo space. In this sense, the Quest is an SUV. All the seats are fixed, and simply fold forward to create the full cargo area. It's easy to do, but you only wind up with 108.4 cubic feet of cargo room. The well behind the third row is permanent, and offers hidden storage under removable rigid panels that double as the rearmost cargo floor when they're in place.

In comparison, a Stow-n-Go Chrysler opens up 143.8 cubic feet of space with its seats all tucked out of the way. The Honda Odyssey (150 cu. ft. max) and Toyota Sienna (148.5 cu. ft. max) are even more spacious, but to get those numbers, you need to remove their second-row seats and store them somewhere. Even the GMC Acadia's max cargo space tops the Quest at 116 cubic feet. What's more interesting is that the Acadia might be Quest's closest comparison, despite being an SUV-style crossover, since its seating arrangement is essentially the same as the Nissan's. And there's the rub. You may not require all that extra room 90 percent of the time, but man, it's nice to have when the need arises.

As tested, the Quest LE with the sunroof option came in at $43,510. It's pretty good looking outside, great looking inside and entirely pleasant to drive. But if you're spending that kind of cabbage on a minivan, you're probably going to want one that gives you the flexibility to haul the greatest amount of stuff when the need arises. Otherwise, what's the point? And in that respect, the Quest doesn't hang with the competition.

Even though we enjoyed our time with the Quest, its cargo capacity is a deal breaker that makes it less attractive than its rivals. More importantly, as a father of three, I'd buy one of the others myself, because if I do need a minivan, I want one that's more than an SUV with sliding doors. 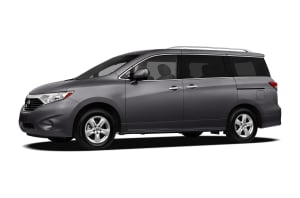