The National Highway Traffic Safety Administration is investigating certain 2010 Ford Fusion and Mercury Milan models for a possible wheel-stud failure. According to Reuters, a total of 317,315 of the mid-sized sedans are being investigated for a default that causes the vehicles' wheel studs to fracture and break over time. This can cause a wheel to detach itself, potentially leading to a serious accident. So far, there have been 29 complaints and 128 warranty claims associated with fractured studs, according to NHTSA, as well as four instances of a wheel actually separating from the vehicle.

Ford, meanwhile, is investigating the root cause of the defect at this time while NHTSA upgrades its efforts from a preliminary investigation to an engineering analysis. A recall could result should the manufacturer or government regulators decide that the issue is widespread. NHTSA opened its preliminary investigation into the matter six months ago. The Fusion and Milan twins have were previously investigated for sticking accelerator pedals. 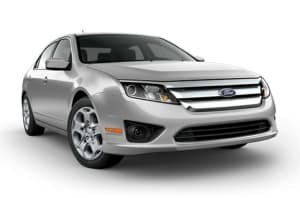