It's been a good long while since the BMW 740Li badge graced American shores, and even longer since the entry-level 7 Series packed anything other than eight furious cylinders under its hood. The last time a straight-six lurked behind the quad head lights of the big Bimmer here in the Land of the Free, Bill Clinton was still hanging around Arkansas and the only Cyrus terrorizing the airwaves was Billy Ray. Since then, an entire culture of consumption has blossomed and withered under the glare of questionable loans and fluctuating oil prices, and as such, automakers like BMW have begun to alter their wares to fit the times.

When it came to the long-wheelbase 7 Series, BMW decided to abandon larger displacement engines options for smarter, more efficient powerplants that wouldn't disappoint buyers accustomed to a world-class performance threshold.

Cue the arrival of the N54 – a twin-turbocharged, direct-injected 3.0-liter inline six-cylinder engine that's happy to provide propulsion for the 2011 BMW 740Li. To drive it is to handily dispatch any and all naysayers who would have you believe that an executive sedan needs a V8 to hold its head high in the business district.

BMW graced our tester with its painfully attractive M Sport Package, a grouping that throws in subtle aerodynamic and aesthetic tweaks all over the sedan for the princely sum of $6,500. Those alterations include a substantially more aggressive front fascia with larger, sculpted air inlets and faux canards down low. The nose-job gives the 7 Series substantially more presence than the standard model, and the treatment is backed up by impressive 19-inch split-spoke M wheels. They're the kind of rolling hardware a person could fall in love with, and they're wrapped in Goodyear 245/45/R19 rubber.

Otherwise, there's little distinguishing the M Sport Package-equipped 7 Series from its non-M brethren – at least in profile. It's easy to spot the additional 5.5-inches of wheelbase that the 740Li boasts over its 740i twin, however. Spanning just over 17 feet, this is a conspicuously long sedan, though the vehicle wears the proportions well – especially when compared to competitors like the Lexus LS 460 L. Whereas that behemoth is stitched together with awkwardly-long rear doors, the long-wheelbase BMW can brag about a more organic shape.

Around the rear of the 740Li, the M Sport kit throws in a significantly reworked rear valance with a sharper mid-crease and dark detailing around the dual exhaust outlets. The combined effect is admittedly stunning, but the package is still a bit dear in price.

Hop inside and you'll notice that the steering wheel has also received the M Sport touch. The contoured helm is wrapped in appropriately soft hide and laden with enough switchgear to put a primate on the moon – or at least give him control over cruise, media and Bluetooth connectivity onboard. The rest of the cabin remains beautifully executed and positively teems with detail. This vehicle has some of the most attractive door handles we've ever levered, and while the seats in our 740Li lacked the soft Nappa Leather of higher trims, the Dakota skins didn't exactly have our derrières recoiling. Buyers can opt up for the pricier hides, but we don't see the need.

Our tester also also came equipped with a $1,200 camera package, which provides the driver with a composite view from both the sides and rear of the vehicle during reverse maneuvers. We wouldn't exactly call the technology necessary, but it does make for easy parking in tight spaces. Check out the Autoblog Shortcut below to see what we mean.

While BMW technically has a new N55 single-turbo six-cylinder engine laying around in the parts bin at the moment, the company decided to work its older direct-injection N54 twin-turbo unit into the 740Li. Why? The old lump handles higher boost pressures better than the new kid on the block. To that end, the company's engineers cranked up the forced induction to 10.2 maximum pounds per square inch, which helps the inline-six achieve its 315 horsepower at 5,800 rpm. The 740Li also benefits from 330 pound-feet of torque at an impressively low 1,600 rpm. The engine is bolted to a conventional six-speed automatic transmission that churns power straight to the rear axle.


Those numbers may be down from the 400 horsepower and 450 lb-ft of torque turned out by the turbocharged V8 in the 2010 750i, but the inline-six cylinder weighs a full 215 pounds less. That's not baby fat by any measure and the reduction helps give the 740Li a better weight balance.

With its full 330 lb-ft of torque on tap just off of idle, the 740Li remains a quick machine, especially for its size. At full throttle, the six-cylinder under the hood produces a satisfyingly characteristic BMW growl, and though true thrust comes in somewhat higher in the rev band, the engine is content enough to lounge about in the tachometer's basement during interstate driving. We braced ourselves for a heap of frantic shifting as the transmission logic fought to keep the engine at peak power, but experienced nothing of the sort during our week behind the wheel.

Dip a big toe into the accelerator and you're rewarded with capable, reliable propulsion. Should you get bored, the BMW's suspension and shift mapping can be nudged into Sport or Sport + mode for some truly mind-boggling acrobatics. We have no idea why a car of this size needs to be able to embarrass much smaller sport coupes down your favorite mountain pass, but we applaud BMW for hewing an enthusiast edge into its executive sedan all the same.

When you aren't hellbent on poking Newton in the eye with your key fob, the suspension and shift mapping can be settled into Normal or even Comfort mode. While cruising at an easy 2,000 rpm or less, the straight-six is smooth and quiet enough to paint a grin on even the most callous hedge fund manager's face.

The Environmental Protection Agency says that the 740Li should be good for 17 mpg city and 25 mpg highway. We saw just shy of 19 mpg combined during our admittedly aggressive stint with the vehicle – nearly in line with the 20 mpg combined estimated by the EPA. For comparison, the old 750Li was only able to serve up 14 mpg city and 21 mpg highway.

The 2011 BMW 740Li starts at $74,550 plus an $875 destination fee, though our tester was saddled with enough optional equipment to land it an as-delivered $89,025 price tag. That's a fat stack of cash, especially considering that the entry price for a 750Li sits at $88,200. But the MSRP on the 740Li underscores an important point – you can easily outfit this model to carry all of the convenience and luxury features of the 750i or the 760i with a more efficient engine... provided you're willing to open up your checkbook.

Given the impressive capability of the 740i's N54 engine, we'd have a hard time letting a salesman talk us into a more powerful 7 Series. The old adage may say that there's no replacement for displacement, but BMW's 740Li makes a strong case for forced induction and a straight-six. 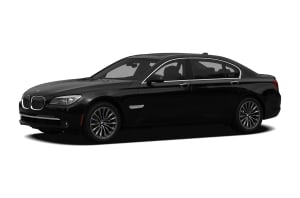