Ford's reborn Explorer has been selling at a brisk clip since being introduced for the 2011 model year, with some 65,823 units finding homes through June. While that's a far cry from the line's salad days back in the '90s, that total already pips the previous generation's 2010 sales figures for the entire year. And that's with just one engine, the 3.5-liter V6.

The Explorer's naturally aspirated six is about to get a more frugal companion, with Ford finally announcing that it will deliver the promised 2.0-liter four-cylinder EcoBoost soon. The new model will arrive toting some handsome fuel economy numbers, too – 20 miles per gallon in the city and 28 mpg on the highway (23 combined).

Ford is quick to note that those EPA figures mean that the 240 horsepower (at 5,500 rpm) and 270 pound-feet (at 3,000 rpm) EcoBoost engine will garner best-in-class highway economy ratings for the Explorer – some 12 percent better than the Toyota Highlander and a whopping 20 percent better than the Honda Pilot (though the latter is slated to get a new six-speed gearbox and improved mpg for 2012). Like most newer turbo DI engines, the 2.0-liter will run happily on regular 87-octane fuel.

For comparison's sake, the standard TiVCT V6 generates more horsepower – 283 ponies at 6,500 rpm– but less torque (252 lb-ft at 4,100 rpm), with commensurately lower economy figures of 17 city and 25 hwy (20 combined). That means EcoBoost intenders can expect to save about three miles per gallon across the board. Click through the jump to continue reading.

We spoke with Scott Makowski, Ford's North American I-4 manager, and he notes that great efforts have been made to deliver a quiet and efficient engine, something that can be a particular challenge with direct-injection powerplants. Special measures to reduce noise and increase efficiency include isolated injectors to reduce 'tick,' polished tappets and lightweight, low friction pistons. Ford has not published what sort of weight-savings (if any) can be expected from this new, smaller engine versus the 3.5-liter model, but Makowski did note that the new engine is about 100 pounds lighter than the last Explorer's less powerful 4.0-liter V6.

This 2.0-liter EcoBoost engine will only be available on front-drive models, and despite similar power figures and superior torque, towing capacity suffers, dropping from 5,000 pounds to just 2,000 pounds (both when properly equipped with the Class III towing package).

The 2012 Explorer 2.0 will roll into showrooms beginning late August carrying a $995 premium versus comparable V6 models. Is the EcoBoost's improved fuel economy worth the cost premium and diminished tow rating? We'll soon find out...

• The completely reinvented Ford Explorer powered by EcoBoost™ delivers a class-
leading EPA rating of 28 mpg on the highway, besting Honda Pilot by more than 20
percent and Toyota Highlander by 12 percent

DEARBORN, Mich., July 28, 2011 – Ford's hot-selling Explorer is now the most fuel-efficient
seven-passenger SUV on the market, delivering an EPA-certified 28 mpg on the highway with
an all-new 2.0-liter EcoBoost engine. This is the first application of this advanced engine in
North America.

Now launching in the Explorer, this advanced EcoBoost four-cylinder engine provides the
optimum balance between fuel efficiency and responsive power, delivering 240 horsepower at
5,500 rpm and a generous 270 lb.-ft. of torque at 3,000 rpm.

EcoBoost is a global Ford strategy to provide affordable fuel efficiency for millions of drivers
while also delivering the power they desire EcoBoost will eventually be offered on 90 percent of
Ford nameplates by 2013.

Explorer fuel efficiency also benefits from a smooth vehicle shape and careful aerodynamic
detailing like optimization of the front air dam and rear liftgate spoiler lip and lightweight
components such as an aluminum hood.

In the first six months of 2011, Explorer sales totaled 65,823 vehicles. This figure exceeds the
full-year 2010 total of 60,687 Explorers. More than half of early buyers of the redesigned 2011
Explorer cited fuel efficiency as a primary motivation in their purchase decision. Moreover, the
majority of customers are choosing better-equipped XLT and Limited series models.

The 2012 Explorer is assembled at Ford's Chicago Assembly Plant. 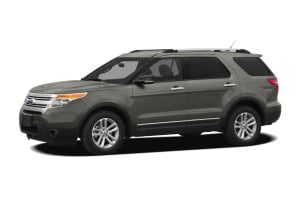