Subaru unveiled its steroid-enhanced Impreza – the XV concept – at the 2011 Shanghai Motor Show earlier this year, previewing what a high-riding version of the automaker's new C-segment hatchback could look like. Here in the United States, the XV is better known as the Impreza Outback Sport – a vehicle which we've gotten quite accustomed to, especially for its signature two-tone look.

Interestingly, when we spoke with Subaru officials earlier this year, we were told that the XV isn't in the cards for the U.S., but that it's being considered. However, other markets are slated to get a production version of the crossover as early as next year, and the final design looks to be revealed with these Chinese patent office filings. It looks like exactly what you'd expect from a modern-day Outback Sport, which is to say higher-riding and modestly toughened up visually.

If the XV does arrive in the States someday, Subaru tells us that it likely won't be called Outback Sport. Still, with these patent filings showing a left-hand-drive setup, and with China Car Times reporting that a 2.0-liter inline-four (the new boxer engine) will be underhood, we don't think it'll be too hard for Subaru to adjust this thing for American use. 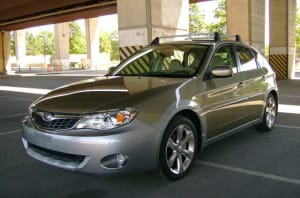