Ladies and gentlemen, the 2012 Audi TT RS has officially landed in the United States. And there was much rejoicing.

Audi has announced that one Don Istook has purchased the very first American-spec TT RS from Fort Worth Audi in Texas. Istook is a longtime Audi enthusiast, having raced Quattro coupes in the mid-1980s, and in more recent times, S4 and TT models.

The 2012 Audi TT RS is priced from $56,580 (excluding $875 for destination), and it marks the return of the automaker's RS performance line to Yankeeland. The last RS model available on these shores was the RS4 (rest in peace, you stunner). The TT RS will no doubt continue the tradition of Audi's performance monsters, boasting 360 horsepower and 343 pound-feet of torque from its 2.5-liter turbocharged five-cylinder engine. Follow the jump for the official press blast.
Show full PR text
First Audi TT RS sold in U.S. marks return of heralded high-performance RS line

The return of the heralded Audi RS line to the American performance car scene officially launched when Forth Worth Audi in Texas delivered the first 2012 Audi TT RS in the U.S. to veteran race car driver Don Istook.

Last year, Istook was one of more than 11,500 fans to sign the Audi TT RS Facebook petition drive, which helped convince Audi to introduce the 360-hp coupe in the U.S. But Istook's connection to Audi and to the TT performance car line runs far deeper. The Fort Worth native was one of the first drivers to race an Audi Quattro in the U.S. in 1985 and he drove Audi S4 models in the Motorola Cup, which became the Grand-Am Cup. More recently he has raced Audi TT quattro coupes.

"Having raced at almost every major track in the U.S. and Canada, I've pushed the limits in many cars in my 34 years as a race car driver," Istook said. "I like my street car to give me some of that thrill. With my new Audi TT RS, I not only get that thrill, but I also get that 'race car' sound."

The 2012 Audi TT RS stands as the pinnacle of the TT model line, representative of the highest performance category for Audi vehicles. The Audi TT RS, powered by the award-winning 2.5-liter turbocharged five-cylinder TFSI engine, generates 360 hp between 5,500 and 6,700 rpm, and 343 lb-ft of torque between 1,650 and 5,400 rpm for power on demand. With aluminum and steel hybrid ASF® technology and standard quattro® all-wheel drive, the TT RS offers excellent aerodynamics and increased rigidity and safety.

The newest Audi for the U.S. market truly showcases the performance engineering of the RS line of sports cars produced by quattro GmbH in Neckarsulm, Germany. The RS line has given Audi a special element of sports appeal, individuality and exclusivity.

"The technical capabilities of the Audi brand are perfectly distilled in the RS models developed by quattro GmbH," said Johan de Nysschen, President, Audi of America. "For the past few years, American sports car enthusiasts have pleaded with us to make the marquee available here. With the TT RS we are now furthering the Audi performance story that includes models from the Audi S4 to the new Audi R8 GT."

Audi has announced plans to follow up with the U.S. introduction of the Audi RS 5 coupe next year. Audi dealers expect keen interest in the RS line.

"Interest in the return of the RS marquee has been so strong that Mr. Istook is allowing us to keep his TT RS at the dealership longer to show Audi fans and customers," said Bobby Baillargeon, owner of Forth Worth Audi.

But the specific appeal of the Audi TT RS – and the rest of the Audi RS line – is performance and handling.

"Superb brakes and handling go right along with the magnificent power from the 2.5-liter turbo, especially the low end torque," Istook noted. "It reminds me of the mid 80's when we raced the original 5 cylinder turbo Audi Quattro. What is great, though, is that I get all of that, yet I have the refinement, sophistication and technology of a truly modern sports car." 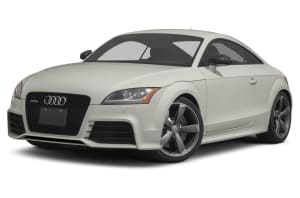