Despite a flurry of media attention at launch, sales of the Smart ForTwo have done a nosedive since its Stateside debut in 2008. Unsurprising, considering you could strap a lawnmower engine onto Yao Ming's left rollerskate and build a better car. But the ForTwo wasn't a failure of vision, it was a botched execution. Yet despite being underwhelming, overpriced and fitted with one of the worst gearboxes ever crafted by man, we're still seeing a slew of them puttering around San Francisco during the our first drive of the 2012 Scion iQ.

Coastal-types and urbanites are apparently hard-up for something spectacularly small, equally frugal and simple to park, so bringing the iQ to SF was a no-brainer for Scion. Its quirky shape and minimalist-at-all-costs design is the kind of thing Northern Californians should eat up with an oversized ramen renge. As well they should. The aptly named iQ outsmarts Smart at its own game, minimizing the compromises and creating something better than a pint-size commuter.

Sales of the Toyota-branded iQ have been going rather strong in Japan and Europe since its debut in 2008, and with Scion's aging line-up, it made sense to inject the 120.1-inch hatch into Toyota's "youth" division.

Weighing in at a scant 2,127 pounds, it's not only the lightest offering in the Toyota/Scion stable, it takes the trophy for the world's smallest "four-seater." In truth, however, that designation is a bit of a misnomer. Toyota originally called the iQ a 3+ 1 in Europe, meaning it could fit three people with ease and a fourth in a pinch. In reality, it's more of a 2+1.5. Two full-sized adults have ample room up front, and while Scion insists the seating layout is asymmetrical – with the front passenger seat moved slightly forward to provide room for someone in the rear – in actuality, it's more of a design ploy than a useful feature. As soon as someone moves the seatback into a comfortable position, any and all rear legroom disappears.

That said, Toyota tasked its tallest engineer (over six feet), Hiroki Nakajima, with development of the iQ, and he squeezed in with Jack Hollis, Scion's Vice President, and two other six-foot ToMoCo employees for a 30-minute drive around the city. So yes, it can be done. But unless you regularly shuttle midget amputees, it's best to consider this a two-seater with 16.7 cubic feet of cargo capacity with the 50/50 rear seats folded down (a tiny 3.5 cubes with the seats in place).

But that's not to say that the iQ isn't a packaging marvel. With its wheels pushed to the outer edges of its bodywork and a low profile (five-inches tall), center-mounted 8.5-gallon fuel tank spanning the space underneath the driver and right-rear passenger, the maximization of interior volume and compact engineering beneath its sheetmetal makes Tetris look like a game of stick and ball.

A compact air-conditioning unit mounted directly behind the dashboard's center stack eschews the complexities of a larger system, while a high-mount rack-and-pinion electric power assist steering setup means interior intrusion is nonexistent. MacPherson struts up front partner with a specially-developed torsion beam rear end to maximize rear-seat hip room and cargo space, aided by slim-back front seats that can be pulled forward with a small tug of the walk-through lever on either side of the seats. It's all trick stuff – until you get under the comically small hood.

A new (for the U.S.) 1.3-liter 1NR-FE four-cylinder engine cranks out 94 horsepower at 6,000 rpm and 89 pound-feet of torque at 4,400 rpm. A continuously variable gearbox with settings for Sport and "B" – engine braking – shuffles that miserly grunt to the front wheels through a compact differential that's front-mounted ahead of the engine and transmission, once again maximizing interior space.

Even with a relatively high 11.5:1 compression ratio, Scion says you can run the iQ on 87-octane fuel all day long and get 36 mpg in the city, 37 on the highway and 37 mpg combined. Naturally, maximum acceleration isn't the iQ's forte, with a 0-60 mph time of 11.8 seconds and a top speed of 100 mph – something we independently verified. Going downhill. On the freeway. With a tailwind.

The fact we were able to reach that speed without pulling bits of the cloth seating out of our sphincter is a testament to the iQ's surprising all-around competency. Compared to the Smart and even the Fiat 500, the iQ's freeway manners are completely unmatched, remaining calm and even comfortable at 80+ mph – surprising considering its short (78.7-inch) wheelbase and modest engine. But the CVT's proclivity for pegging the engine over 6k RPM when laying into the throttle – mustering more noise than motivation – makes carpet-mashing a rackety, droning affair. Yes, the iQ would be far more fun with a manual (something that's not up for consideration in the States) and the 10.1-inch vented front discs and 7.1-inch rear drums began to fade within minutes of blasting down a particularly twisty backroad, but to slight the iQ for driving engagement is to completely miss the point.

Let's start with the turning circle. The ForTwo does it in 28.7 feet. The iQ? 25.8 feet. Visibility out of the oddly-S-shaped rear quarter windows is excellent for quick lane changes and even quicker parking maneuvers. And see where the rear windshield ends? That's where the iQ ends, making backing, parallel parking and any kind of close-confines maneuvering easier than anything with four wheels. And yes, despite our griping about rear-seating space, both the driver and front passenger have ample leg, shoulder and headroom.

The interior is a genuinely enjoyable place to spend a bit of time, with relatively high-quality, soft-touch plastics up front that predictably devolve into lower-class kit further down. The steering wheel tilts but doesn't telescope and comes complete with a redundant audio controls and a "flat bottom" (barely) that frees up some knee space. The seats, thin and lacking any serious bolstering, kept us comfortable during a pair of hour-plus stints behind the wheel, although said wheel's ability to communicate anything aside from deep ruts and Smart-swallowing bumps could be charitably described as lacking. But again, this isn't a driver's car.

It is, however, a Scion. And that means customization and interior trinkets abound. Seven exterior colors – including the Hot Lava hue of our tester – are available at launch, and to paraphrase Mr. Ford, you can have any interior color as long as it's black (and gray). Two cover choices mask the 16x5-inch steel wheels (with 175/60R16 all season rubber) or you can upgrade the rolling stock to 16-inch alloys (no summer rubber option), along with TRD lowering springs and a rear sway bar. Take our advice and skip those two; the ride is rough enough as-is, although there's a fair amount of body roll and tire squealing as soon as the iQ is pushed.

Scion has cribbed a book from the Nissan Juke playbook (or perhaps that's the other way 'round, as the funny-faced softroader came later), fitting a motorcycle-like gauge pod to keep tabs on speed and revs, with the standard "Scion Drive Monitor" mounted to the right of the IP to track fuel level, mileage, average speed, outside temp, trip, odometer and CVT setting. An "Eco Drive" light and bar of indicators lets you know how you're treading on the throttle, and we rarely saw the green light illuminate unless coasting on the freeway or down Market Street.

The stereo options come in three flavors, all with only four speakers: a standard 160-watt unit with two RCA inputs, HD radio and Bluetooth phone and audio streaming; the Pioneer Premium head unit with 200 watts of juice, incredibly slick iPhone Pandora integration and a 5.8-inch TFT touchscreen; and the Navigation package which bumps the screen to seven inches, comes equipped with iPod video, video input (for a back-up camera) and an aging GPS UI. But no Pandora. If you're packing navigation software on your phone, opt for the Premium pack, pick up a phone mount for the dash and know you've made the better deal. On a related side note: Scion was quick to point out that the iQs we were testing were pre-production units, so attempt to ignore the steering column-mounted phone mic expertly adhered with electrical tape.

You'll find a USB port and an eighth-inch line-in next to the door lock and traction control buttons fitted to the left of the shifter gate – placement we can get behind – as well as a pivoting, multi-directional LED dome light that needs to make it into more vehicles. It's just smart and simplistically cool, and probably cheaper to produce than most standard interior lights. And before you ask, no, there isn't a full-sized spare (you're stuck with a can of inflatable goo and an air-compressor) nor is there a traditional glove box. You've got to stuff your various and sundries into a drawer underneath the passenger seat, although there's a nice pocket of space for a purse or murse aft of the center console.

On the safety front, the iQ comes with a predictable cadre of acronyms, including ABS, EBD, SST, TRAC and VSC, along with 11 standard airbags, including a world's first rear window airbag that shields the (already) unlucky rear-seat occupants from behind.

As reported previously, pricing for the base iQ is set at $15,995 (including $730 destination) and will roll out to showrooms beginning on the West Coast this October, followed by the East Coast in January and eventually the southern states and the Midwest.

As a strictly cost/benefit equation, that price of entry might be hard to swallow considering the amount of space and better fuel economy offered by similarly priced compacts; namely the Mazda2, Ford Fiesta and Hyundai Accent. But none of these are as urban-friendly or funky-chic as the Scion. At the heart of it, the iQ is a four-wheeled fashion accessory with a surprising amount of functionality that was engineered for city dwellers with a penchant for attention. Just like the Smart. But where the ForTwo falls woefully short, the iQ steps up in every conceivable metric. It drives better, it looks better and it's better suited to both bouncing around town and taking a day-trip on the freeway. And Scion is gambling that 'better' is all this segment needs to survive. 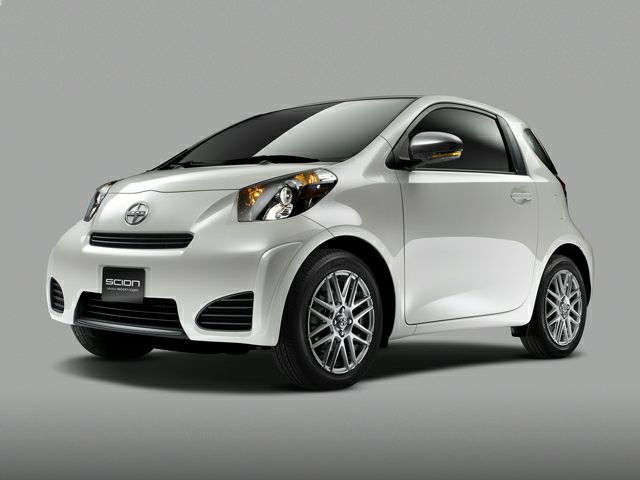