Some folks say there's no replacement for displacement. We'll agree that there's nothing quite like the roar of a big ol' naturally aspirated V8, but in modern times (and with new fuel efficiency laws taking hold), turbocharging points the way forward.

Nearly every automaker on the planet is scrambling to create turbocharged alternatives to larger-displacement engines, and over the past few years, not offering some sort of forced-induction mill has become quite the automotive faux pas.

Mercedes-Benz recently introduced a pair of twin-turbo V8s in its refreshed 2011 CL-Class, and while our lead feet immediately sprinted towards the bombastic CL63 AMG with its 5.5-liter hand-built heart, there's a lot to be said about the base CL550's all-new 4.6-liter setup. The once-sedate CL550 just got a massive flame lit under its tail, and the end result is a grand coupe that has more personality than ever before.

The Mercedes-Benz CL is a classically beautiful car. Jaguar may have nailed modern beauty with its XK, but the CL teems with gracious elegance – think of Vivien Leigh as Scarlett O'Hara descending a staircase in Gone With The Wind. Mercedes' designers have created a big coupe that truly has an "I have arrived" presence, and from all angles, the car is stunning to behold. We like the base CL550 because, while the CL63 AMG has plenty of aggressive design elements to its front fascia, the 550 focuses more on pure beauty of form while still looking powerful.

For 2011, Mercedes has largely left the CL's design alone from the new-for-2007 model, only adding small touches like a revised front fascia with new LED running lamps and some minor tweaks to the car's hind quarters. We still adore the pillarless greenhouse design, and our test car's $5,900 sport package – 19-inch AMG wheels, different front and rear bumpers, and side skirts – brings the presence of powerful elegance together.

Entering the CL550, however, isn't exactly an elegant process. Because of the CL's frameless window design, the glass needs to roll down ever so slightly to free itself from its seal with the roofline, and this slight hesitation creates a clumsy experience when pulling the door handle. We've experienced similar systems on dozens of cars without issue, but the one on our CL was noticeably less smooth. Ms. Leigh may have made heads turn as she started to descend the staircase, but this lack of fluidity is the equivalent of stumbling over her dress on the first couple of steps.

Once inside, you're swaddled in the same level of comfort and refinement you expect in any top-notch Mercedes. The interior design hasn't changed for 2011, and that's just fine. The CL550's cabin continues to look tasteful and sophisticated, with expansive surfaces coated in the finest leather-clad, million-way adjustable seats for supreme comfort, and there are surprisingly capacious accommodations for two rear passengers. Small touches like the brushed-aluminum buttons, up/down toggle switches along the center stack and soft ambient lighting all give off this superb sense of luxury that you don't always get in the lower rung of Mercedes' interiors. It's not exactly Bentley Continental exclusivity in here, but spend five minutes inside the CL and you'll feel like you're worth a million bucks.

From behind the wheel, the CL's size is amplified, and we'll admit, it's intimidating at first. Still, it only takes a few feet of driving to figure out the car's dimensions and general visibility is good from all angles. Of course, there are seemingly thousands of cameras and sensors that will inevitably cause sirens to sound and lights to flash if the car ever detects that you might be doing something wrong.

The biggest change for the 2011 CL550 is the implementation of the automaker's new 4.6-liter twin-turbocharged V8. (Yes, it would make sense for Merc to change the car's name to CL460, but let's not get into that. This is the same company that put "6.3" badges on all of its 6.2-liter V8-powered AMG cars, after all.) This smaller-displacement, forced-induction powerplant cranks out a healthy 429 horsepower at 5,250 RPM, and more importantly, 516 pound-feet of torque at 3,500 RPM. Compared to the old naturally aspirated 5.5-liter V8, the new engine is good for increases of 47 hp and a whopping 125 lb-ft.

This is the engine we've wanted all along in the CL, and we can't wait for it to quickly spread throughout the remaining 550-badged Benzes.

This new base engine has 51 more foot-pounds than the old 6.2-liter AMG engine, and thus, it helps the 2011 CL550 dash to 60 miles per hour in just 4.8 seconds. That's impressive for a 4,619-pound luxury barge that sends power to all four wheels. A standard 2,978-pound Porsche Boxster S isn't even that quick.

There's a nice, throaty exhaust note that roars from the dual exhaust pipes when you're pressing hard into the throttle on takeoff, but our one complaint about the power delivery is that the seven-speed automatic transmission is far too relaxed about firing off shifts, even in Sport mode. We wish the cogswapper were a bit more forceful about grabbing each gear by its horns, rather than simply letting them fall into place. The drive-adaptive tranny has an Eco mode for those who want to attempt to drive the CL550 efficiently, and in 90 percent of all cruising-through-town cases, it's silky smooth. Be on your best behavior and you'll muster up 23 miles per gallon on the highway – sounds good, but don't be surprised if your actual mileage numbers are closer to the EPA's 15 mpg city rating.

Straight-line power is fantastic and all, but the CL550 really starts to show its big bones when you enter a corner. Mercedes has fitted the CL with its new Direct-Steer speed-sensitive steering system, and while it's great for long, swooping curves down tree-lined, two-lane country roads, the amount of body roll is alarming when trying to take a sharp right-hander faster than the suggested speed sign recommends. Even so, if you decide to try to get the CL frisky, the now-standard 4Matic all-wheel drive will keep the big coupe firmly planted to the road.

Every other part of the CL550's dynamics – namely, the brakes and the throttle response – are more honed for this sort of country-cruising grand touring rather than serious performance. That's fine, because the 550 handles these tasks beautifully – it's perfectly poised for relaxed afternoon drives and effortless long-distance hauls. The CL550 is more appropriately suited for a waltz than the CL63, the latter of which would be more at home acting as a bouncer in a mosh pit.

With a starting price of $113,150 – or $127,565, as tested – you'd be right to expect this sort of performance from the CL550. Our biggest complaint about the old model was that, while it never failed at being a smooth, comfortable land yacht, it lacked any sort of personality that one might want for occasionally spirited drives. The new model addresses that issue and fixes it with pure brilliance. Good riddance to the naturally aspirated 5.5-liter V8 – this is the CL550 we've always wanted. 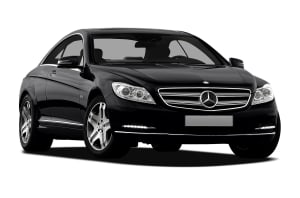