View All Specs
Add a Review
Is Zoom-Zoom More Important Than Room-Room?

When we think of mid-size crossovers, words like "comfort," "convenience" and "roominess" are the first things to spring to mind. For some CUVs, those are accurate descriptions, but the Mazda CX-7 also has to fulfill a Zoom-Zoom promise. For the past 11 years, Mazda's mantra has meant that driving excitement must be injected into every vehicle it builds, whether it's a roadster like the MX-5 Miata or a minivan like the Mazda5.

Athletic handling is a no-brainer for sports cars like the RX-8, but crossover owners typically expect creature comforts, utility and a smooth ride. We've been won over by the CX-7's sporty genes before, but the crossover field is far thicker and more talented than it was back in 2007 when the CX-7 first hit the scene. Does this Mazda softroader still strike the right balance? We spent a week getting reacquainted with 2011 CX-7 Grand Touring to find out.

When ordering a CX-7, Mazda makes the choices simple enough. There are four CX-7 models available, ranging from the $21,990 I SV model to our Grand Touring tester. The two lower-end trims can only be had in front-wheel-drive form and each model sports a 2.5-liter four-cylinder with 161 horsepower and a standard five-speed automatic transmission. The Touring and Grand Touring models can be had with either front- or all-wheel drive and the engine of choice is Mazda's turbocharged 2.3-liter four-cylinder mated to a six-speed paddleshift automatic.

Our Liquid Silver Metallic Grand Touring tester sported AWD and carried an MSRP of $33,340. That price tag includes just about every accoutrement in the options box, save for a few accessory-type add-ons and second-row DVD navigation, which can be had for an additional $1,200. That means USB and auxiliary inputs, leather seats, moonroof and navigation are all part of the package, leaving exterior and interior color combinations as the only choices to make.

We may have ended up with the top CX-7, but every example of Mazda's mid-size CUV starts with the same sharp-looking sheetmetal. Think of it as a Mazda3 on HGH, except instead of growing brows and a massive neck, the CX-7 wears the muscle necessary to pull off the happy face aesthetic better than its smaller sibling. The CX-7 also scores high marks for managing to successfully strut the aggressive wheel arches of sportier fare like the RX-8, giving this CUV a purposeful stance. It helps that those wheel wells are filled with 19-inch alloys wrapped in P235/55R19 rubber.

In short, the CX-7 looks like a 65-inch-tall sporty hatchback. And that's not a bad thing. Step inside the CX-7's cabin and that same athletic aesthetic carries forward. The dash is cockpit-like, while the leather-wrapped steering wheel has a race-inspired feel. To fit everything in the dash, Mazda's designers opted for a dual cowl approach, with the top section housing LCD screens that display vehicle information and navigation. Below the data is a dizzying array of buttons on the center stack that makes it difficult to spot what you're looking for. The same problem presents itself on the CX-7's steering wheel, which features far too many controls for its own good.

Even more depressing is the fact that Mazda's button problem isn't the worst of this crossover's interior issues. Despite being updated for 2010, the CX-7 still makes use of low-rent plastic all over the cabin. And since the CX-7 features an incredibly cab-forward design, the windshield seemingly goes on for miles, as does the cheap plastic dash. While the front thrones are comfortable and well-bolstered, the second row lacks thigh support and leg room struggles to compete with some hatchbacks. Not good.

Mazda's mid-size crossover also comes up a bit short dimensionally when compared to its competition. The Ford Edge offers another nine cubic feet of overall passenger room (108 cubic feet versus 99 cubes) and another 10 cubic feet of maximum luggage volume (58.6 versus 68.9 cu. ft.). The story is similar when comparing the Honda CR-V or Chevrolet Equinox; the CX-7 falls short each time. It does help its case thanks to the ease with which its backseat space is accessible. Click on the Short Cut video below to see what we mean.


While the competition has a leg up on the CX-7 when it comes to interior utility and refinement, Mazda engineers fight back with a terrific driving experience. This CUV packs a four-wheel independent suspension with MacPherson struts and a stabilizer bar up front and a multi-link setup in the rear. That's some high-end chassis hardware, but it's what Mazda engineers have done with the bits that make the CX-7 a more entertaining steer than any mass-market CUV has the right to be. The CX-7 handles more like a sports sedan than a typical crossover, as the driver is rewarded with crisp and agile handling without much of the sloppiness and body roll we've had to endure in other jacked-up wagons. We're talking about a 4,001-pound ox here, so this level of composure is particularly impressive. Steering is excellent as well, with a speed-sensitive setup that progressively adds weight as you push harder into the bend. Don't stretch the limits of the CX-7 too hard, though, as the 11.7-inch vented disc brakes go spongy after repeated hard stops.

It would be a tremendous waste to engineer such a capable chassis if the powertrain weren't capable of delivering the goods. Most competitors offer a powerful V6 as their top engine choice, but the CX-7 opts for a turbocharged four-cylinder. The direct-injected 2.3-liter engine packs 244 horsepower at 5,000 rpm and an impressive 258 pound-feet of torque at a low 2,500 revs. As a result of all that torque, the CX-7 packs most of its punch straight off the line. 0-60 figures to be right around 7.5 seconds, which is hardly enough to frighten the competition, but the CX-7's confidence-inspiring dynamics mean that it feels much quicker and you're comfortable maintaining momentum into turns that might see you scrubbing off speed in other CUVs. The Grand Touring model's six-speed automatic transmission is a smooth shifter as well, and we were especially pleased with its impressively quick shifts when using manual mode.

If we had one complaint to level at the CX-7's powertrain, it would be turbo lag. Power delivery isn't particularly linear, especially off the line. And if you're expecting the uninterrupted shove of a traditional V6, the turbo'd sensation will take time to get used to.

The CX-7 also disappoints a bit when it comes to fuel economy. While the normally aspirated two-wheel-drive base model CX-7 can hit up to 28 miles per gallon, our AWD tester with the more powerful engines manages only 17 miles per gallon in city driving and 21 mpg on the highway. We managed an average of only 18.4 mpg during a week, which places the CX-7 behind most mid-size (and even many full-size) crossovers. Some full-size pickup trucks are more efficient – and they don't ask for premium fuel. While the small-displacement-four-banger-plus-turbocharger seems to be today's fuel-efficient alternative to V6 engines, the CX-7's powerplant just doesn't have the same magic sauce as newer, more high-tech alternatives. We expect Mazda's SkyActiv engines to correct this oversight when the CX-7 is replaced, but for now, this Mazda feels unusually thirsty.

As an enthusiast, it's hard to argue with the CX-7 as the mass-market crossover of choice for drivers. But it leaves us wanting when it comes to things like interior quality and fuel economy – attributes that most buyers prize in crossovers. That disconnect bears itself out when looking at the aging CX-7's sales numbers. Mazda managed to sell only 2,873 units in April while much of the competition moved five or six times as much metal.

Does the CX-7 live up to Mazda's Zoom-Zoom mantra? Absolutely. But it's also abundantly clear that crossover buyers still prioritize comfort and utility – and that's precisely where the CX-7 comes up short. 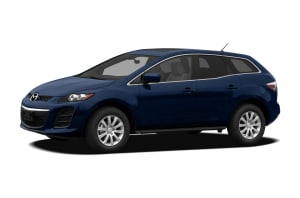