Every time we read Douglas Adams' The Hitchhiker's Guide to the Galaxy, we find something new. Adams was able to spin phrases that hit on multiple levels, and his work requires repeated attention to be enjoyed in full. We wouldn't be surprised if the folks at Kia have been reading a bit of Adams themselves, because their latest lineup has been commanding multiple looks.

With new models being churning out both here and abroad, Kia is offering a range of vehicles that hit consumer needs on multiple levels. The latest member of the family is the 2011 Kia Optima Hybrid, and it's looking to speak to the green-tinged car-shopping contingent.

The 2011 Kia Optima Hybrid is a rather handsome beast that looks just like its non-battery-pack-carrying siblings – at least at first. Just as they do on their more conventionally powered cousins, the lines on the Optima Hybrid flow rearward from the car's slyly smiling face and into the slick greenhouse. A subtle shoulder line helps break up the Optima when viewed in profile, and a set of distinct LED taillamps integrate those same details neatly into the rear end.

Kia engineers have employed a variety of tweaks to help the hybrid on its quest for better fuel economy. The non-hybrid Optima enjoys a Nissan 370Z-like 0.29 coefficient of drag, but Kia wanted to get that number a bit lower for the hybrid. To accomplish this, engineers fitted their gas-electric baby with grille shutters, a plastic belly pan, rear spoiler, slightly revised rear fascia and a lower ride height. The result? The Optima Hybrid's drag coefficient is down to just 0.26.

Further setting the Hybrid apart from the standard Optima are a set of gas/electric-specific 16-inch alloy wheels, low rolling resistance Hankook tires and the prerequisite "Hybrid" badge affixed to the rear end. The tires are perfectly suited for the job and offer a fair amount of grip, yet the rubber's still built for coasting along smoothly and comfortably. They also handle the 3,490-pound Hybrid's curb weight, an increase of 267 pounds over the 2.4-liter gas-only Optima (3,223 pounds) and 105 pounds over the 2.0-liter turbo (3,385 pounds). Beyond badges and weight, it's inside where this Kia packs a few surprises.

The 2011 Optima Hybrid is the first Kia vehicle to feature the company's new UVO information, entertainment and communication system. We had a chance to sit down with Henry Bizeh, the national manager of infotainment & connectivity, for a walk-through of the new unit.


As impressive as UVO sounded when Kia announced the system, it's even more so in person. The system grabs hold of our speech flawlessly, which it should, as it's a version of the same technology that Microsoft first developed for Ford's popular SYNC system. It's hands-free done right, and we're glad to see it finally appear in more vehicles than just ones wearing blue ovals. UVO, however, is just one part of the Optima's value equation.

For $26,500 (plus $750 destination and handling), buyers receive an eight-way power adjustable driver's seat, dual-zone temperature control, push-button start and a back-up camera. Leather is used to wrap both the steering wheel and shift knob, and both front windows are one-touch up and down. From the driver's seat, our backs were supported, our bottoms coddled, and the entire dash cants slightly towards the driver's seat, a design element we're always keen on.

This efficient four-door comes generously equipped right out of the gate. Of course, should you desire a touch more luxury, Kia offers its Hybrid Premium Technology Package. This big bundle of kit will cost you an extra $5,000, and adds 17-inch alloy wheels wrapped in Nexen tires, a panoramic sunroof, heated and cooled front seats, heated rear seats and HID headlamps. The package includes a few other small upgrades, but it's the upgraded eight-speaker Infinity sound system and navigation system that stand out as the main attraction. Strangely, the higher-quality setup ditches the UVO system. Sure, the screen gets larger and you have GPS on your side, but we hope Kia combines its premium audio offerings with UVO sometime soon.

As you'd expect, this midsize isn't just an interior tech machine, it's also a lightweight at the pump. The 2011 Optima Hybrid is rated at a fuel-sipping pace of 35 miles per gallon city and 40 miles per gallon highway. For comparison's sake, the gas-only 2.4-liter model is rated at 24/35, though in our experience, the numbers it can generate are often better than that. Unfortunately, we didn't get enough time with the car to see how the Hybrid's fuel economy shakes out in real world driving.

The Optima Hybrid's thrifty estimated figures arrive courtesy of a 2.4-liter four-cylinder that works in tandem with a 1.4-kWh electric motor. Together, the duo pumps out 206 horsepower at 6,000 rpm and 195 pound-feet of torque. A 34kw lithium polymer battery system supplies current to the electric motor, and it weighs in at 95.9 pounds. All of the that energy is routed through a six-speed automatic transmission.

As drivers, the conventional torque converter gearbox is a welcome respite from the CVTs that whine away in most gas-electrics, yet we didn't expect it to turn the Optima Hybrid into a sporty green machine. Good thing, too, as this Kia isn't very quick. It can get out of its own way, but we were grateful for the transmission's good old-fashioned kickdown when we needed a bit more go.

Around town and in everyday driving, there's more than enough power to dole out, although occasionally the ECU doesn't deliver the exact amount of energy that your right foot is expecting. The throttle modulation takes some getting used to. Of course, an extra dose of motivation is only an intermittent requirement, and we actually found it far more fun to see how long we could keep the car running on voltage alone. As per Kia, the 2011 Optima Hybrid is capable of moving along at 62 miles per hour solely on the battery pack's electric juice. Getting the car to flash the EV light in the dash is as simple as easing off the throttle pedal. Like Deadliest Catch fisherman in between strings, all four cylinders take a well-deserved nap until they're once again called into service.

Once you pull away the extra features and hybrid components, this is still the same Optima that earned positive marks in our full review, albeit one that's down on trunk space a bit (hybrid gubbins chop stowage space to just 9.9 cubic feet, down from 15.4). Its steering accuracy is solid, though feel is still missing. The brakes grab the wheels and haul in speed rather nicely, and they do this regardless of driving mode thanks to the hydraulic power brake booster.

The Kia's biggest trump card is arguably its pricing – the Optima hybrid is feature-rich and wallet-light compared to the rest of the competition. The Ford Fusion Hybrid starts $2,100 higher. The Toyota Camry Hybrid starts $550 more, is rated at just 31 mpg city/35 mpg highway, and produces 187 horsepower, which is 19 less than the Optima Hybrid. It's the same story for the $300 more expensive ( and nearly gone) Nissan Altima Hybrid, which yields 33 mpg city and highway while producing 198 horsepower.

The costlier Fusion aside, the only real contender seems to be the Hyundai Sonata Hybrid, which starts $705 less than the Kia Optima Hybrid. Hyundai's midsize hybrid also matches the Kia in fuel economy ratings and power figures, but the Optima Hybrid is treated to a lot more equipment to make up the difference, including the aforementioned UVO infotainment system.

It may not be Hitchhiker's Guide-good just yet, but Kia's story has become quite an interesting novel of its own. It may have started a bit slow for some, but it's certainly picking up and the 2011 Optima Hybrid is its latest chapter. It doesn't take the processing power of Deep Thought to tell you that a well-equipped and fuel-efficient midsize sedan should be a sales hit. Now, if Kia can just bump the highway fuel economy rating to 42... 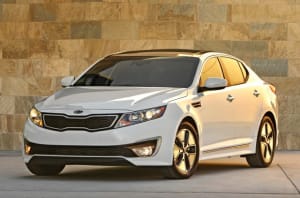