We're all passionate about saving the world, but the amount of enthusiasm we each have is different for everybody. What's your passion level? Let's turn the question into a sliding scale; on one end sits, say, BP, while on the other end, we find Ed Begley Jr. It's a big scale. If you find yourself edging close to the Begley side of the spectrum, you're no doubt paying attention to the fresh crop of all-electric cars on the market.

At least, it did up until last week when the company filed for bankruptcy a second time. Clearly, attempting to bring a relatively affordable electric vehicle to the masses is difficult without federal funding ( Tesla Motors) or the bank account of a major automotive manufacturer ( Nissan Leaf). Think has been down this road before, and it's possible that a group of investors could arrive to save the day. But for the company to be successful, the cost of its car, called the City, would need to come down and marketing dollars would need to go up, both of which are easier said than done. Is Think's machine even worth saving?

The 2011 Think City is a 100-percent electric hatchback wearing recyclable body panels and interior trim pieces. It's designed to attract urban eco-warriors, but does it have a broader appeal? We borrowed the key to one and spent a few hours scooting around the Orange County, California coast to find out.

If Paula Deen were in charge of the Think City's exterior design, her recipe would call for a heap of Smart, a dash of Mini Cooper headlights, one squashed Suzuki SX4 and, of course, a load of butter. That last bit would explain the matte yellow color seen on our test vehicle. Despite our car's sunny exterior, Think only offers the City EV in three colors; Bright Red, Sky Blue and Classic Black. That's fine by us, because our tester would look better if it weren't wearing We-Don't-Know-The-Sex-Of-Our-Baby Yellow.

Think has gone the ultra-compact route with the City EV, and this makes sense seeing that this tiny two-seater is designed to battle for parking spaces in urban environments.

Staring at the outside of the City, we had expected the inside would be reminiscent of a cramped Manhattan studio apartment. Since your author is taller than the average bear, we're very happy to report that the interior of the Think is closer to Central Park. Both seats make our backs happy, and all of the climate and audio controls sit close at hand. There's also a cloth roof that slides back at the push of a button, infinitely increasing our already ample head room.

That tall roof combines with a short wheelbase for an interesting combination of front and rear visibility. The front windshield is cut at a tight angle, which puts the top right in our line of vision. The bottom, however, extends far out, and provides a great view of the road directly in front of the City. Out back, the lightweight rear hatch runs all the way down to the bumper. This makes rearward vision amazing, while the forward view is merely adequate.

Mounted ahead of the cabin space is an electric motor that provides 34kW of power under normal load. If necessary, it can jump to 37kW, which is about 50 horsepower. Paired with a one-speed gearbox, operating the Think City is as basic as it gets. Key in, twist, hear nothing, pop the shift lever into D and away you go, a greener person. And you're able to "go" thanks to the 66 pound-feet of torque available.

That sentence almost seems like a joke, or perhaps we accidentally read the power rating for a hopped-up lawn tractor. We can assure you it's not a joke, and we never thought it felt like one either. Rather than stick to torching Toyota Prii from stoplight to stoplight, we pointed the Think towards Southern California's 405 freeway. The manufacturer lists a top speed of 70 miles per hour, yet we found that you can squeeze a bit more out of the speedo. With our foot planted and the motor buzzing like Johnny Five at CES, we were able to push the fun up to 81 mph. That's plenty should you need to take your City to another city, as long as it's close.

Reining our speed back in, we returned to the streets and were greeted with something we expected: reduced range. Think states that the City is capable of running for 100 miles on a single charge. We didn't push the electric coupe to zero percent capacity, but we did run it down to about 20 percent. When we picked it up, we saw 80 percent on the meter, which means we used about 60 percent of battery. We turned the odometer for 45 miles over the course of that 60 percent.

For the duration of those 45 miles, we found the steering to be surprisingly heavy. Also surprising was the fact that the wheel was actually rather communicative. The road and the City are good at talking to each other. We also were able to aggressively sample the brakes, which is par for the course in me-first California driving. We only needed to slow 2,290 pounds, so the stoppers work efficiently and smoothly. The City EV is equipped with four-wheel ABS and regenerative capability for both its front discs and rear drums, should you encounter California driving at its most exciting.

While Southern California may not be the ideal place to drive the $36,495 Think City, it is no longer one of the states that offers an incentive to purchase one (California did have a $5,000 spiff, but that program has since run out of cash). Louisiana, Illinois, Georgia and Colorado offer $3,000, $4,000, $5,000 and $6,000 incentives, respectively, however. Should you reside in Indiana, you may have hit the Think jackpot – in addition to the $7,500 federal credit, you could receive a rebate worth around $9,000 back from your state – provided you have operate a commercial or government fleet and you operate said fleet within 100 miles of Indianapolis or Elkhart.

In addition to state and federal incentives, Think comes bearing its own rebates, as well. Does your address say California, Oregon, New York, New Jersey, Massachusetts, Connecticut, Pennsylvania, New Hampshire, Rhode Island, Maine or New Mexico? If so, you can chop another $4,000 off of that $36,495 MSRP, which may finally get it below that of the competitively priced and ultimately more capable and polished Nissan Leaf.

The 2011 Think City is not cheap, but can quickly become affordable with governments and the company itself throwing money back at you. Some of you may be interested at this point, right? Problem is, Think's bankruptcy issues have put a stop to City production. Ener1, the battery supplier and prior Think investor, has stepped in to try and recover $35 million in unpaid loans. Not exactly the position you want to be in when trying to sell cars, regardless of how they're powered.

The Think situation is a shame really, because some consumers are ready to push deeper into the Begley side of the spectrum. If you're close, the City will certainly make you think about it making the all-electric leap. At least... it would've. 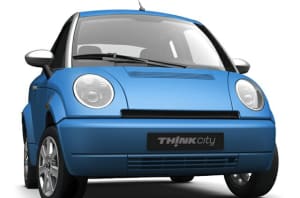