Any time a journalist starts waxing poetic about automotive styling, you can practically hear designers' eyes spinning in their sockets. I've met plenty of automotive scribes with a master's degree in mechanical engineering, but I've yet to shake hands with one packing a design sheepskin. Granted, the average car buyer is better served by someone with an intimate knowledge of liquid thermodynamics and the finer points of suspension geometry. But then along comes something like the 2012 Mercedes-Benz CLS550 and we simply don't have the vocabulary.

Stepping out for a smoke with the lead automotive artist from Mercedes' Advanced Design Studio, it's hard not to look at the second-generation CLS and start playing styling critic. The play between light and shadow; the sculpted rear haunches; the character line that rises then plummets from the headlamps, across the fenders and terminates in the rear doors. Who am I kidding? I'm of no station to make you endure endless, uneducated platitudes cribbed from the car-as-art schtick. I just know the new CLS looks damned good from any angle, particularly the the waning sunlight of California's Napa Valley.

But here's the kicker: The design is nearly seven years old.

"I started working on the [new] CLS in 2006," says Hubert Lee between puffs of a bummed American Spirit, "but how do you remake an icon?"

The 37-year-old designer (so what have you done with your life?) was tasked with pitching his design to the corporate heads in Germany. "It was stressful," Lee admits, conceding that designers always draw exaggerated concepts to ensure that some of their favorite elements make it to production. "You're lucky if you can get five-percent of your design into the final product."

Judging by the initial sketches and the CLS550 we just snagged the keys to, Lee and his Southern California design team have managed to get more than a fraction of the original design into production. Whereas the fascias of the latest SLK and SL look a bit tacked-on, the new face of Mercedes-Benz appears wholly integrated into the CLS. From our vantage point, its C-shaped foglamp surrounds, upright grille and mirror-filling Three-Pointed Star gel into the best iteration of M-B's corporate nose to date. The body looks milled from a solid chunk of steel and makes the still-beautiful departing model look positively dated by comparison. And that's just the outside.

The interior has evolved and, while it looks and feels like any other modern Mercedes cabin, it eschews some of the less-than-pleasing materials and layout from the last four-door coupe (M-B must have finally recouped the development costs of the original and poured the extra ducats into the interior).

Like the CLS63 AMG we sampled earlier this year, the 2012 CLS550 drops the old naturally aspirated V8 for a new twin-turbocharged engine that delivers more power and more torque, while reducing emissions and boosting fuel economy by some 15 percent to an estimated 16 miles per gallon in the city and 26 on the highway. Unfortunately, Mercedes' badge nomenclature will continue to baffle the mildly-informed car-spotter. Whereas the outgoing engine was a 5.5-liter V8, this new dual-turbo'd powerplant has slimmed down to 4.6-liters of displacement. Augmented by 12.9 psi of boost, it's good enough for 402 horsepower from 5,000 to 5,750 rpm and 443 pound-feet of torque between 1,800 and 4,750 rpm. While that might pale in comparison to the 518 hp and (sport-pack boosted) 590 lb-ft of the CLS63, it still delivers a healthy 0-60 mph time of 5.1 seconds when equipped with the standard seven-speed automatic gearbox. And after sampling both models back-to-back, the rear-drive CLS550 predictably comes across as the more relaxed, compliant daily driver.

Credit Mercedes' continued propensity for making the best torque converter-equipped auto 'boxes on the market, the CLS550' seven-speed – even in Sport mode – is a more refined gearbox than the Speedshift MCT setup fitted to the CLS63. Shifts might not be neck-snappingly quick, but they're smooth and measured, and coupled with the nearly lagless turbo 4.6-liter, high-speed freeway runs and backroad blasts are effortlessly dispatched without sacrificing engagement.

The electromechanical, power-assisted speed-sensitive rack-and-pinion steering tightens up for the twisties and goes slack in parking lots, delivering just enough feel to inform your palms, while remaining staid and unencumbered when making small corrections on the highway. The same goes for the standard Airmatic semi-active suspension with adaptive damping, which, partnered with the three-link independent front suspension and multi-link rear, makes for a comfortable ride in all manner of conditions. And on the subject of all conditions, Benz's 4Matic all-wheel drive will be available, turning the CLS into an foul-weather flyer.

Body roll, dive and squat are all present but minimal, and the 14.2-inch front brakes with four-pot calipers (12.6-inch in the rear with single-pot stoppers) partnered with the standard 18-inch all-season rubber (sized 255/40 R18 on 8.5 x 18.0 wheels in front and 285/35 R18 on 9.5 x 18.0 out back) make deceleration a competent and composed affair. Sure, we'd like a little more communication through the wheel and from the slightly squishy brake pedal, but in the realm of a jaw-droppingly stylish sedan, the CLS continues to stand in a class of its own.

While nearly every automaker under the sun has taken the four-door coupe ball and run with it since the CLS' debut, the first round of would-be contenders still lack the presence and finesse of the original – let alone this thoroughly reworked 2012 model, which, we might add, comes to market with a new lower base price of $71,300.

Lee and his crew might have sweated remaking a modern-day aesthetic icon, but they've done one better: They've reestablished the CLS as the definitive slant-roof sedan. It's just too bad we skipped out on the Advanced Industrial Art class in college. We might have had the credibility to call it one of the best automotive designs of the 21st century. 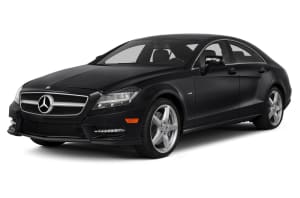