Over the years, Chrysler has built some awesome cars, and some... less than awesome. In one corner sits the Dodge Viper, that V10-powered beast of a car that arguably more aptly demonstrated the blue blood running through Auburn Hills' veins more than anything else in the company's history. In the other, the rather unfortunate Chrysler PT Cruiser, a retro hatch that may have demonstrated some originality when it first came out, but by its demise had long since outworn whatever charm it may have had in the first place.

The solution? Why, a marriage of the two, of course! One of only two reportedly built, this PT Cruiser featured some rather extensive modifications. For one, it did away with the rear doors and hatch back in favor of an enclosed pickup bed to give it a similar profile to the Chevrolet SSR. But as you might have guessed, that wasn't the end of it. Not by a longshot.

The builders also replaced the PT's four-banger with a V10 engine from a Dodge Viper. Now, the 500-horsepower 8.3-liter engine didn't come along until the 2003MY Viper, but given that this vehicle was said to have been built in 2000, we'll have to assume it's the original 8.0 tuned up a little. Although the notion that it was built more recently – say, after 2005 when the PT Cruiser convertible was introduced – seems a distinct possibility.

Along with the engine, the builders also transplanted the Viper's six-speed gearbox, rear suspension, steering rack and more. It's up for grabs now on eBay Motors, with bids standing – reserve unmet – at $12,322 as we went to press. 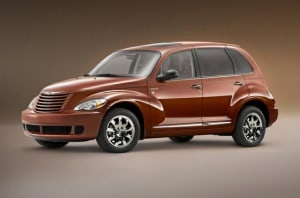