Would you describe yourself as an optimist? Someone who can always find the good in something that others fail to see? It's an admirable quality, and one we're going to try and keep in mind while putting down our thoughts on the 2011 Nissan Pathfinder.

We could write a thousand-word essay on the demise of the large, three-row, body-on-frame sport utility vehicle, but that hardly seems helpful. Instead, we'll do our best to point out exactly what penalties you'll be signing up for by choosing this type of vehicle over one of its newer crossover competitors.

Yes, a pessimist could surely find plenty about the aging Pathfinder to complain about, but the deep-seated, glass-half-full optimist can take that 4,800-pound bag of lemons and make some sweet-tasting lemonade. It took the entirety of our week with the 2011 Nissan Pathfinder, but we finally figured out exactly who this vehicle is for. Could it be you? Continue reading...

If someone were to give you a pen and paper and ask you to draw a sport utility vehicle, the resulting sketch would likely look exactly like the 2011 Nissan Pathfinder. It's rugged, thanks to its exaggerated wheel arches and wide flares, but somehow much softer up front due to its friendly chrome fascia. Out back, Nissan has done very little to disguise the fact that the Pathfinder is a big box on wheels, and we appreciate that concession to form following function.

Put simply, the Pathfinder is the very definition of an SUV. And, since this version was first seen on public roads in 2004 as a 2005 model, it was developed when the sport utility vehicle was still king of the people movers. In other words, this ought to be the cream of the SUV crop.

Built atop Nissan's F-Alpha platform, which also underpins the Nissan Frontier and Titan pickups along with the Xterra SUV, the Pathfinder uses a traditional ladder frame, with heavy-duty steel rails that run the length of the vehicle. Everything is bolted solidly to the frame, from the engine and transmission to the body and passenger compartment to the front and rear suspension systems.

Unlike many of its brethren, the Pathfinder eschews a solid rear axle for a four-wheel independent suspension. You'd think that would equal a smooth ride on the highway, but that's not the case. In fact, the Pathfinder rides like the truck it is, no doubt due in part to its fully boxed steel frame. Even small bumps in the road send loud thumps through the chassis and into the occupant's tailbones. Larger bumps are somehow better absorbed by the rigid structure, though you can expect that an equally sized shockwave will reverberate its way through the steering wheel and into the driver's hands.

The 2011 Pathfinder's 4.0-liter V6 powertrain is an able partner in most driving scenarios. There's 266 horsepower at 5,600 rpm and 288 pound-feet of torque at 4,800 rpm – plenty to get this brute moving briskly. One task at which traditional body-on-frame SUVs generally tower over their crossover counterparts is in towing heavy loads. With 6,000 pounds of lugging capacity when properly equipped, the Pathfinder doesn't disappoint. That's better than the Ford Explorer and Toyota Highlander (5,000 pounds maximum) or the Chevrolet Traverse (5,200 pounds), but not as good as the newer Jeep Grand Cherokee or Dodge Durango (7,400 pounds).

There's an optional 5.6-liter V8 that shares the same five-speed automatic gearbox, but we'd pass unless you really need the ability to tow another thousand pounds and you think it's worth the fuel mileage penalty. And that's a very real concern – we averaged an absolutely dismal 13.8 miles per gallon in everyday driving with the smaller V6 engine. Perhaps the less-stressed nature of the V8 under the same operating conditions will yield similar real-world economy results, but we did not have an example on-hand to test.

Another byproduct of the Pathfinder's truck-spec origins is sloppy handling. Body roll is the predictable result of a long-travel suspension and tires with tall sidewalls coupled with plenty of weight and a high center of gravity.

Should we mention that all the Pathfinder's front-wheel-drive crossover competition handle more like typical family cars than pickup trucks? Well, it's true.

Steering the Pathfinder turned out to be something of a double-edged sword. There's very little play in the wheel, and the driver gets a surprisingly good sense of what the front tires are doing on the asphalt below. Sadly, the effort required to actually turn the wheel borders on ludicrous. Piloting the Pathfinder, especially at low speeds where two hands are needed to get proper leverage, is all the upper-body workout you'll ever need.

While we're on the topic of the steering wheel, we have to wonder why the bottom spoke of the three needs to be so thick. There are no buttons housed in that space, yet it's significantly thicker than the two spokes that offer controls.

The steering wheel isn't the only baffling ergonomics issue. The center stack is very wide, and, for reasons completely unknown to us, Nissan has separated the audio controls into two sets of dials and buttons that flank the climate control and infotainment systems. There are two problems with this. First, lumping all similar controls into one spot is generally preferable from an ease-of-use standpoint. Second, the far-right set of controls (the tuning dial along with the scan and seek buttons) are nearly impossible to reach from the driver's seat without adopting an uncomfortable pose.

The rest of the center stack is covered in poorly labeled buttons that control functions on the seven-inch LCD screen mounted above. It's not exactly packed with features beyond offering digital readouts for the audio and climate control, but nevertheless, we even found it confusing to use while sitting still and impossible to get comfortable enough to use while driving. Navigation with a touchscreen monitor and voice recognition are only available as a package on top-level LE models.

There are three rows of seats, meaning the Pathfinder can accommodate up to seven occupants, assuming most of them are small in stature. In every significant measurement, from shoulder room to leg room, the Pathfinder is a few inches tighter than the Explorer and Traverse. This means the second row is really only comfortable for two occupants, and the third is even smaller. Full-size adults can forget about the third row's tiny nose-bleed seats.

Fold those seats down and you've got 79.2 cubic feet of cargo room. With just the third row stowed, there's still a reasonable 48.9 cubic feet to fill with goodies. By way of comparison, the cavernous Traverse CUV offers up to 116 cubic feet of space with all rows folded.

At this point you may be wondering what all the talk about optimism at the outset was all about – this isn't exactly a glowing evaluation of the Pathfinder, after all. But that doesn't mean the machine is completely without merit.

When we set out to find a location to photograph the Pathfinder, our destination led us a few miles across mostly unkempt Arizona dirt roads, and this is where the Pathfinder shines. For whatever reason, the constant bumps, dips and ruts of an unpaved road brings out the best in the Pathfinder's suspension tuning, and the faster you go, the smoother it gets. And when the going gets truly tough, the Pathfinder's truck-based roots mean the transfer case can be slid into low gear, and its generous 8.9 inches of ground clearance mean you'd need to be doing something really crazy to get stuck. It turns out that "Pathfinder" still is a very apt name for this traditional truck-based SUV.

So, if you have a large family of smaller-than-average people, and you live on a long dirt road, and you have sufficient funds to keep the gas tank full, the Pathfinder may be your ideal vehicle.

If you don't fall into that infinitesimally minute category, you'd almost certainly be better off spending $36,720 elsewhere – at least until Nissan revisits this segment stalwart. 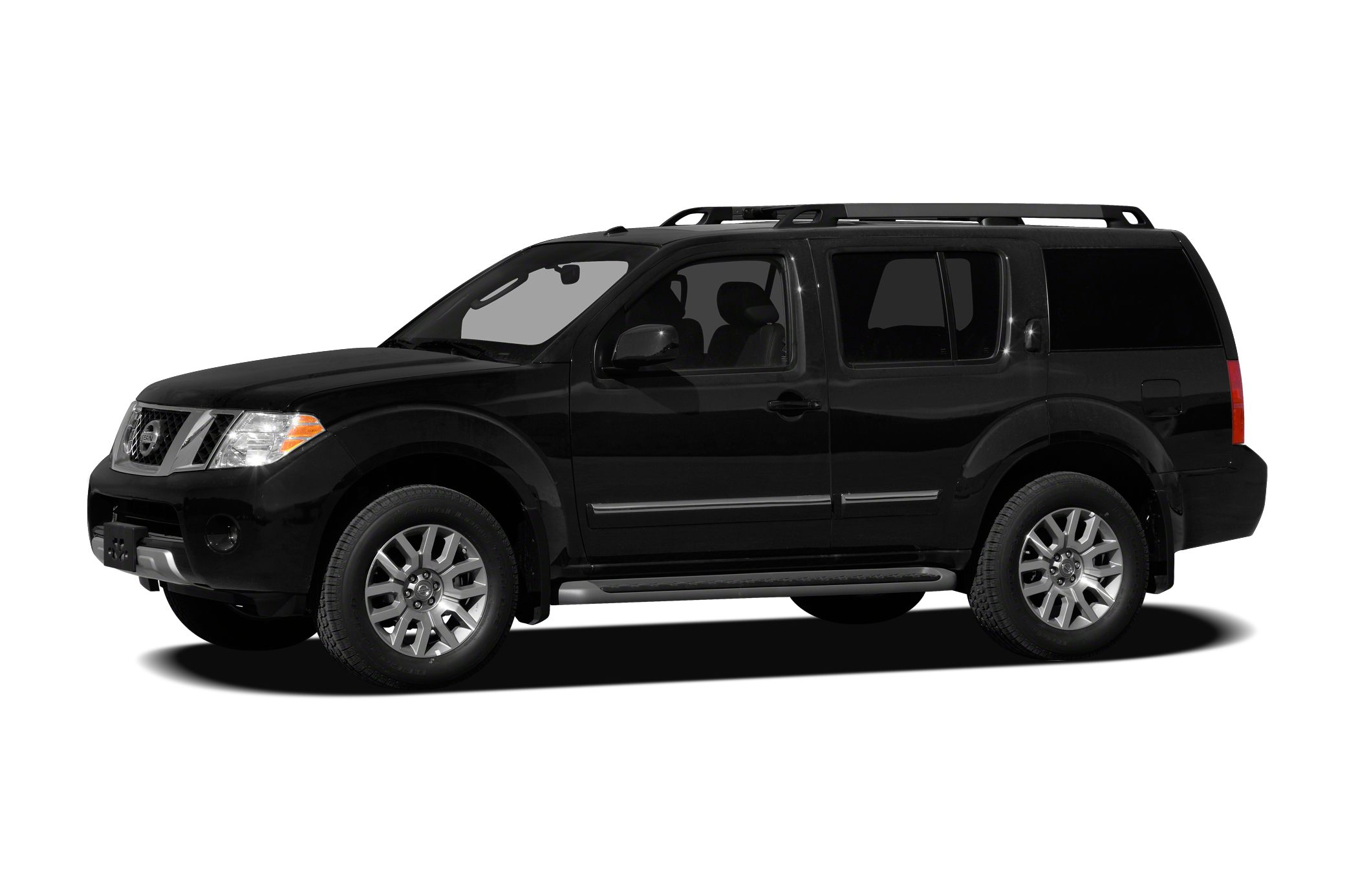