It's easy for a car maker to take one of its econoboxes, shoehorn in a more powerful engine and call it sporty. It's another thing entirely to make it enjoyable to use with minor touches like the 2007 Volkswagen GTI's leather-covered owner's manual stored out of the way on a shelf above the glove box, or the lighted door lock switches, and the little plastic flap that covers the greasy hatch mechanism (right). None of these things alone would get much attention in most car reviews, but add them up and they take a starring role in this one.

If you read John Neff's GTI 2-door review, you know all the statistical stuff about VW's new pocket rocket, but let's run through them anyway so we're all on the same page. The turbocharged 2.0 I4 engine pumps out 200 hp and 207 lbs. ft. of torque in a four-door car that weighs just over 3,100 pounds and does it getting decent mpg. Its modestly handsome good looks aren't easily distinguished from lesser vehicles, a good thing when attempting above-legal speeds on public roads. Not that we would encourage that, of course.

So let's take a good look at those good looks. To make a GTI, Volkswagen starts with a humble Rabbit, and, on the outside, adds special 17" wheels with low-profile performance rubber, a rear spoiler and a cute little dark red smile below the grille. It's a look that says German sports car more than boy-racer and, like we said, should help you fly below the local radar. Our tester wore optional 18" alloys, which nicely showed off the car's red brake calipers.

Though we thoroughly enjoyed those supportive, side-bolstered seats and one of the most rocking OEM automotive stereo systems we've ever heard, if you're just shopping for a German-engineered, MazdaSpeed3 alternative, the base GTI's got ya covered. Lose the luxuries and you can bring the price back down to a more reasonable base of $22,600.

Our car, to our utter delight, had the 6-speed manual instead of the much-praised DSG automatic transmission. Running that little 4-cylinder up to redline, punching the clutch, hearing that turbo blowoff valve open and taking the shifter to the next gear was more fun than unlimited lives on Ms. Pac Man. This car, we swear, can cure baldness. No, really. After driving the GTI for a week, my hair was thicker, fuller and more manageable. I'm not sure if it's a by-product of the turbocharger or if the car somehow induced my body to make more testosterone, but I do know I'm in need of another treatment. We put it through turns and corners and twists and turns and, wow, it just kept pleasing. Highway ride is just rough enough to remind you there's a sport suspension below, but was not unbearable at all. Turbo lag, as well, was near non-existent.

Anyone hearing the initials G, T, and I together can safely assume it's in reference to a fast, fun VW. But how is it as a car? A family car. That's much tougher to pull off, and the GTI does it really well. In fact, I think I could have convinced my wife how badly our family (and my hairline) needs one, if only we'd had an automatic. The 5-door's hatch swallowed our Graco stroller with room to spare and with all the seats upright. We couldn't get the child seat installed in the preferred center position because of a stubborn head rest. The manual says it's removable, but we tried everything short of a crowbar and it didn't budge. So we stuck our child seat on the driver's side and our little one seemed quite happy back there even during some of the more, uh, spirited highway exit ramps. My wife liked the ride, interior and exterior, as well as my thicker head of hair. So, yeah, this quick little hatch could easily be Mom's baby buggy during the week and Dad's choice for Sunday's SCCA Autocross.

We did have one big surprise, though. The car's sticker boasts EPA mileage numbers of 23 city and 32 highway. Yeah, right. Those are, of course, EPA's old numbers and, under the new system changes to 21 city, 29 highway. That's pretty good in a premium-swilling, souped-up car like this, even more so when you consider the 5-speed, non-turbo Rabbit claims updated EPA numbers of only 19/28. Even with the GTI's sixth gear, we found those numbers quite doubtful. That is, until the end of the week when, after what some might call overly-aggressive (but legal, mind you) driving, we got an amazing 22 mpg combined. This car was just too much fun for us to drive like a grandma, so we think we can say with assurance that real-life numbers will be much closer to EPA estimates.

We live in the U.S. of A., not Heaven, so naturally we found some things not to like. The biggest complaint has got to be VW's choice of navigation system. Ours worked just as it was supposed to, but only by pushing a bunch of little buttons on both sides of the screen to get what we wanted. It was not very intuitive and took lots of practice to get the hang of. Just give the GTI a touch-screen system like any number of other manufacturers and things will be right.

Another annoyance was the car's Bluetooth mobile phone syncing. We never got it to work. Not once. There's a button on the steering wheel that, when pushed, should bring up a prompt on the navigation screen to set up a Bluetooth enabled phone. Didn't work. So we e-mailed our VW contact who confirmed that yes, indeed, it didn't work. At all. He said something about VW not procuring the rights to the software in U.S. vehicles or something, but they left the button on the steering wheel anyway. I suggested at least a mention of that in the manual.

One more negative was the car's electronic fuel economy estimator. We know not to trust them, and you shouldn't either. Most are rather optimistic and should never be a replacement for keeping track of the gas you pump and miles driven. One or two mpg plus or minus can be forgiven, but at one point, our car was consistently claiming 86 mpg. We have no idea how the car thought it could get away with a lie that blatant. We caught it and thoroughly punished it with a hearty blast down our favorite mountain road. Its little red smile never wavered. Neither did ours.

So yeah, Dad. You can have your cake, eat it and look and feel younger at the same time providing your family with safe, roomy transportation. And if you can swing another $6,000, you can make the Volkswagen GTI a luxurious cake with leather icing.
All Photos Copyright 2007 Chris Tutor / Weblogs, Inc. 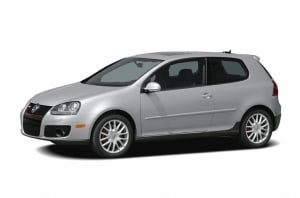