The review says the Rondo is bigger than its direct competition ( PT Cruiser, Matrix, Mazda5), has a more powerful available engine (182 HP, V6), can seat up to seven (one more than the Mazda5, two more than the PT), and has much more interior space. The Rondo even uses less fuel than all those others (25/34 for the I4, 24/36 for the V6). The biggest criticism is the oddly-designed exterior.

Even more odd, is that you still can't find the Rondo on Kia's U.S. website, not even in their media offerings. However, if you want a tiny bit of information, Kia's Canadian site has a few photos and a short description that ends with "Available in dealerships in December 2006."

So where's Rondo? Looks like it's in Canada, headed our way. 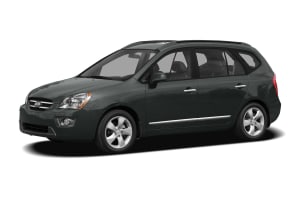